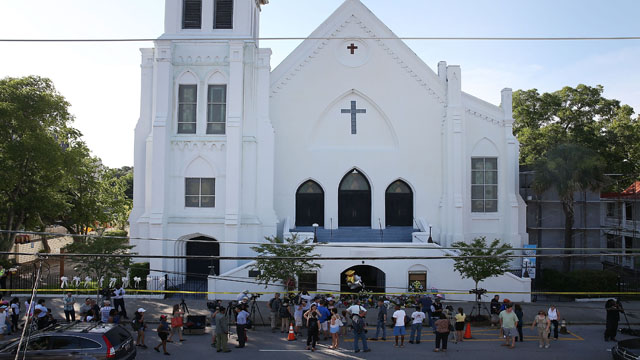 People stand outside the Emanuel AME Church after a mass shooting at the church that killed nine people on June 17 2015, in Charleston, South Carolina (Photo: Joe Raedle/Getty Images)

A jury of 12 —including three African Americans and nine whites — sat for opening statements Wednesday on the first day of the federal death penalty trial for accused Charleston Church shooter Dylann Roof.

Roof faces of 33 federal offenses, including hate crime charges and obstruction of religion, for gunning down nine black parishioners during a bible study at the Emanuel African Methodist Episcopal Church in Charleston, South Carolina on June 17, 2015.

A federal prosecutor called Roof “cold and calculating” during opening statements Wednesday as he described how the 22-year-old researched the church’s history in the black community and sat among the bible study for 30 minutes before opening fire with a .45-caliber handgun, unloading 70 rounds, according to CNN.

Defense attorneys, meanwhile, asked jurors to consider where Roof’s feelings of hatred came from and said he didn’t have any friends, according to CNN.

“How much sense does this crime make, does it make any sense and if any at all, what does that tell you?” attorney David Bruck asked, noting it wasn’t Roof’s guilt in question, but whether his life should be spared.

Opening statements come two days after a federal judge granted Roof’s request to reinstate his legal team for this, the guilt phase of the trial. He will return to representing himself — as he did during jury selection last week — in the sentencing phase of the trial, court documents show.