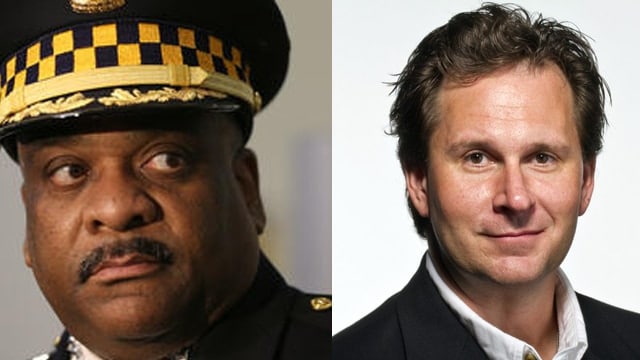 Facing the most violent year in decades, Chicago’s top cop said this week that the city is “not out of control” – something a Chicago Tribune columnist disagrees with.

Speaking at a City Club of Chicago breakfast Tuesday, Chicago police Superintendent Eddie Johnson said he’s upset with the public perception of Chicago. “The truth of the matter is Chicago is not out of control. There’s certain parts of the city that we have to address the violence,” he said.

“The ceaseless killings on this city’s streets suggest Chicago is very much out of control,” writes Huppke in a column published Wednesday. “We are, each of us, no matter where we live, one bullet away from becoming anti-violence activists.

One bullet. That’s all it takes. I’ve seen it more times than I care to remember. Mothers who lost a child to a bullet and recast their lives with a commitment to giving a damn about every other child who falls. Men who lost a brother to a bullet and suddenly understood madness, then chose to stand against it, always.”

Dart and Johnson continue their push for harsher state penalties for repeat gun offenders, and Johnson is optimistic that 350 new detectives due to join the ranks in the next two years will help ease the strain in minority communities, where people are fed up with the violence.

Still, November saw 77 homicides, the most violent November since 1994. And the violence continues.

“There will be more than 700 empty seats in Chicago over the holidays that nothing will ever fill,” said Huppke, noting that all Chicagoans need to own that emptiness, and accept that “ALL of Chicago is out of control.”

“There has to be a collective force of will to regain control,” he wrote. “We can’t keep talking about problems in ‘those neighborhoods.’ We can’t keep partitioning ourselves from the ‘parts of Chicago’ where bad things happen.”