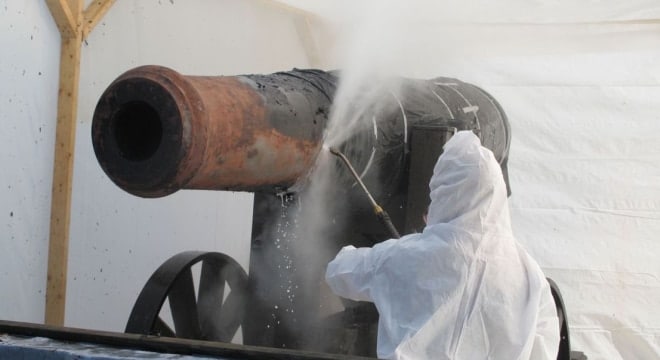 Charleston, South Carolina’s historic Fort Sumter, famous for its role in the Civil War, received an influx of $200,000 to restore 11 vintage Parrott rifles.

The donation came from an individual who wished to keep their name private, in honor of their father, a Citadel graduate.

The 6.4-inch Model 1861 guns at hand, which fired 100-pound shells, are something of a mystery to the National Park Service, being shipped from Georgia’s Augusta Arsenal to the fort in December 1873 and covered in layer upon layer of paint, rusting and pitting– obscuring their foundry numbers which would tell when they were cast and potentially where they saw service during the war between the states.

Fort Sumter was unfinished and partially armed when the war started in 1861 but the brief battle in which the Confederates captured the installation was widely regarded as the opening shots of the conflict. The fort, later garrisoned by southern troops, was in turn placed under siege in 1863 by U.S. forces that ultimately left the masonry fortification in ruins by the end of the war.

It was during Reconstruction that the Parrott rifles were brought in after Sumter was repaired and installed in the first-tier gun rooms of the fort. They could fire a variety of shells to a maximum range of five miles, which was impressive for artillery of the time.

Some 585 6.4-inch Parrotts were produced during the war and just 85 remain in the world. Of the 11 at Sumter, nine have Army markings and two show signs of being produced for the Navy, having anchors cast on the top of their tubes rather than the traditional “U.S.” of the land service’s guns.

Officials think they may have actually been used by the Union troops to bombard Sumter during the war, but won’t know until they can get to the buried numbers under 150 years of paint and grime– which the donation will pay for.

“It’s a possibility that during the Civil War these cannons were actually on Morris Island shelling Fort Sumter and other places,” Fort Sumter historian Rick Hatcher told The Post and Courier.