NRA praises Trump for Time's 'Person of the Year,' but condemns magazine 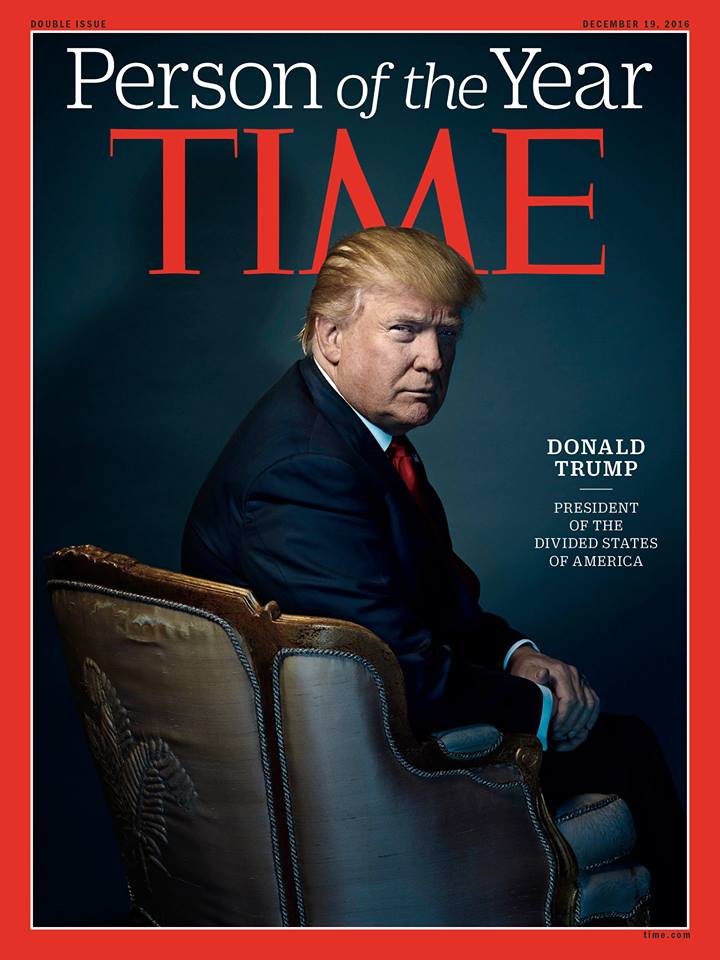 The cover of Time’s “Person of the Year” cover. The magazine named President-elect Donald Trump for being most influential in 2016. (Photo: Time)

The National Rifle Association praised President-elect Donald Trump for being named Time’s “Person of the Year,” but the gun lobby also condemned the magazine for its reasoning behind naming Trump.

“Donald J. Trump is Time’s Person of the Year! The National Rifle Association endorsed the now President-elect this past May in a historic announcement that began a successful movement to Save the Second!” the organization said on social media, but its commentators sang a different tune.

“Today, Time Magazine laughs at all of you, it ridicules you, it looks down at you,” said Grant Stinchfield in an NRATV video posted Wednesday.

Noting that the magazine calls Trump the “president of the divided states of America,” Stinchfield said, “that is an assault on all of you out there who voted for Donald Trump, because Donald Trump’s victory has America optimistic. But Time Magazine can’t capture that. Instead, it slams him.”

“Do people read Time Magazine anymore?” asked commentator Dana Loesch in another video posted to NRATV’s YouTube channel Wednesday. “Nobody reads Time Magazine, but it’s their little slam. And the thing about ‘divided states of America.’ That’s so funny, because it’s not divided,” said Loesch, adding that the magazine is ignoring people who live in so-called fly-over states.

In a behind the scenes video posted to the magazine’s website, Time’s Editor-in-Chief Nancy Gibbs said the Person of the Year award goes to the individual who has had the most influence on the events of that year, for better or worse.

“I know there are a lot of people who disagree with so much of what Donald Trump said and are very apprehensive about what his presidency means for them and the country,” Gibbs said. “I think I would challenge them to suggest that someone else this year had more influence, and in a way a greater surprise than what he did in 2016.”

For Gibbs, she was curious how Trump, a billionaire, could be the tribune of the working man. “He said he thought that it had to do with that he wasn’t a phony,” said Gibbs. “That there have certainly been wealthy politicians before, who in some cases would bend over backwards to make themselves appear like the common man, or do anything that they could — eating the corn dog at the Iowa State Fair, wearing a flannel shirt in New Hampshire.”

“Ya know, I didn’t get Beyonce and Jay-Z and Bruce Springsteen to get crowds,” said Trump in the Time video. “I had just me, and ideas that people wanted to hear.”

“For reminding America that demagoguery feeds on despair and that truth is only as powerful as the trust in those who speak it, for empowering a hidden electorate by mainstreaming its furies and live-streaming its fears, and for framing tomorrow’s political culture by demolishing yesterday’s, Donald Trump is TIME’s 2016 Person of the Year,” Gibbs said in a piece that explained the magazine’s choice.

Still Stinchfield wasn’t sold, calling the magazine’s editors hacks. “(They) should be ashamed of themselves — liberal sore losers who still don’t realize: mainstream media hacks no longer influence Americans hungry for freedom and a return to greatness,” he said.