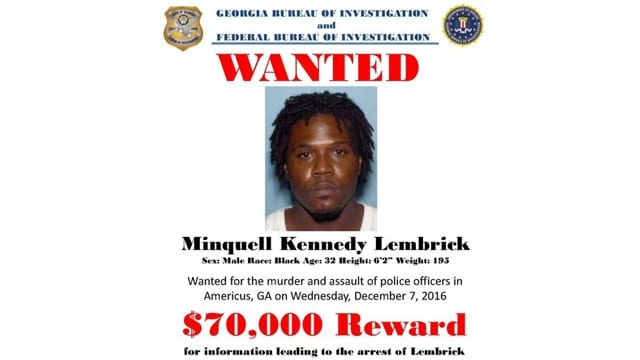 A wanted poster of suspected cop killer Minquell Lembrick, who was found dead Thursday at a home in Georgia. (Photo: Georgia Bureau of Investigation)

Police in Georgia say a man suspected of shooting and killing one police officer and injuring another has been found dead.

Americus Police Chief Mark Scott says 32-year-old Minquell Lembrick was found with an apparent self-inflicted gunshot wound. After getting a tip that Lembrick had holed himself up in a house, police surrounded him, but later found him dead.

The officers, who police say were best friends, were responding to a domestic disturbance call at the time. More than 200 officers were involved in the 27 hour manhunt.

Police confirmed that Lembrick made posts to Facebook before he died, saying he didn’t plan on being captured alive. “I’m gonna miss y’all folks, man,” he said in a video, which has since been deleted.

Police say at least one of the officers had a body camera on, and they’ll review the video.

“Our heartfelt sympathy goes out to the families,” said Scott. “This is a devastating loss to our family here in Americus. It’s just unbelievable.”

Americus is a town of about 17,000 people and is located about 75 miles southwest of Macon.