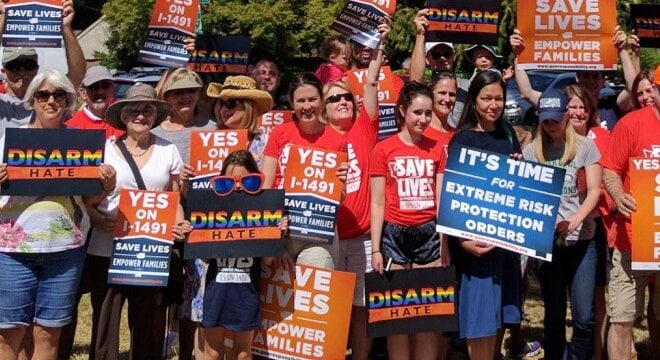 A full 70 percent of Washington’s voters last month approved the gun control measure which was extremely popular along the deep-blue I-5 corridor and less so in the rest of the state (Photo: Alliance for Gun Responsibility)

The lengthy 21-page initiative, I-1491, will allow a family member to file a petition with the court for a judge to decide if a subject poses a threat to themselves or others. This could lead to an order prohibiting firearms possession for up to one year, and could be renewed annually. The subject of the order can request a hearing once a year to rescind the order while those filing false petitions would set themselves up for a criminal penalty.

A full 70 percent of voters who turned out in November’s general election approved the measure. California, Connecticut, and Indiana have similar laws in place.

The new law had the strong backing of national gun control advocates, funded in large part by Michael Bloomberg’s Everytown group, supported by former Arizona lawmaker Gabrielle Giffords, and bolstered by research from the Educational Fund to Stop Gun Violence — the sister organization to the Coalition to Stop Gun Violence — both of which are helmed by Josh Horwitz as executive director.

“Thousands of people would be alive today had they not had easy access to a gun while in crisis,” said Horwitz in an email to Guns.com on Thursday.  “We look forward to expanding this life-saving tool to other states in the coming year,” added Horwitz, saying that no less than 11 states are looking at similar legislation including Delaware, Illinois, Massachusetts, Michigan, Minnesota, Missouri, New Jersey, New York, Pennsylvania, Virginia, and Wisconsin.

Still, gun rights advocates are not buying it and argue the law falls short constitutionally.

Alan Gottlieb, executive director of the Second Amendment Foundation, is also co-chair of the Washington State Safer Homes Firearms Subcommittee on Suicide Prevention and has helped craft legislation to help drop the number of suicides through a partnership of pharmacies and gun dealers. The program will establish a task force and develop materials and training to spot signs of someone at peril from what they term the “nation’s most preventable form of death” in a state where the suicide rate is 14 percent higher than the national average, and is the eighth leading cause of death among Washingtonians.

“I can say that the reason suicides will decrease is because of our education program authorized by the legislature,” Gottlieb told Guns.com, going on to add that the Extreme Risk Protection Order scheme “will have no effect except to deny due process protection to the people of our state.”