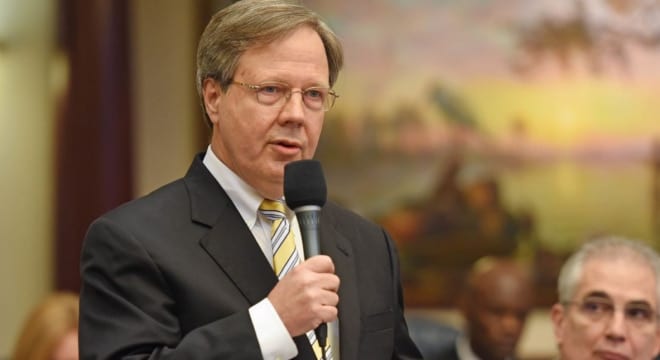 A rebooted measure that could see lawful concealed carry on Florida’s public colleges and universities was introduced Wednesday.

Rep. Scott Plakon, R- Longwood, filed the bill that would allow concealed-carry licensees to tote firearms for self-defense on college and university campuses, a contentious prospect that has been floating around the legislature in Tallahassee since 2010 fueled since then by a shooting on the campus of Florida State University.

“It seems that every one of these tragedies, these mass shootings, happens in a gun free zones,” said Plakton. “Right now we have gigantic gun free zones on college campuses.”

Plakton’s measure, HB 6005, would repeal Florida’s prohibition on lawful concealed carry at the state’s public post-secondary schools. Currently, students, employees and faculty can only carry a stun gun on campus while the closest they can bring a gun is a locked car in a parking lot.

Campus carry bills have proven elusive for Republican lawmakers in Florida. Efforts in 2010 fell flat while those in both 2015 and earlier this year stalled in the Senate Judiciary Committee where the chair, Sen. Miguel Diaz de la Portilla, R-Miami, refused to schedule a hearing on the legislation.

Since then, Diaz de la Portilla lost his bid for reelection and has been replaced on committee by incoming Sen. Greg Steube, R-Sarasota, who as a state representative sponsored campus carry measures in the Florida House.

Opposition is already in place to Plakton’s bill, with FSU President John Thrasher on Wednesday in his annual “state of the university” address decried such a proposal, which he has lobbied against on several occasions.

“I opposed it. I killed it. I have worked against it since then,” said Thrasher. “And you have my promise that I will work against it this year also.”

According to the National Conference of State Legislatures, eight states now have provisions allowing the carrying of concealed weapons on public college campuses with Texas most recently placing such a law into effect. However, that club could soon grow.