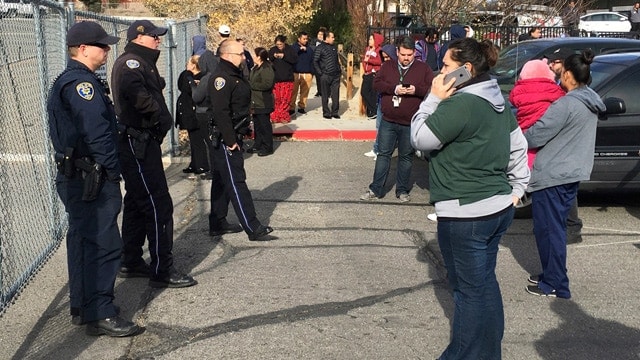 The incident led to a school-wide lockdown as authorities secured the area. (Photo: AP)

An incident between several students at a Reno high school Wednesday morning ended with a 14-year-old boy being shot by a school resource officer after the teen pulled out two knives while threatening other students.

The Reno Police Department said the incident unfolded around 11:30 a.m. at Hug High School, according to a statement. Officers learned that the teen, who was identified by his father as Logan Clark, was involved in an altercation with at least two other students when he pulled out the knives.

Cell phone video of the incident, which was shared all over social media, shows Logan swinging the knives around – one in each hand – as about 40 students looked on and officers attempted to talk him down. But when Clark continued to swing the knives and failed to follow verbal commands given by the officers, he was shot a single time in the upper torso.

Officers on the scene then rendered aid until Clark was transported to a local hospital. As of Thursday, he remained in critical condition. No one else was injured.

The officer who fired the shot has been placed on administrative leave, as is standard protocol.

Reno police Officer Tim Broadway acknowledged that there was a great deal of “disturbing video” being circulated on the internet, but cautioned against jumping to conclusions about the shooting. He noted that there were “other events that led up this incident.”

One parent, whose son is friends with Clark, told reporters that the teen was a good kid, had been “bullied for days” and “was obviously defending himself” when he pulled out the knives. The parent also said he believed it was “out of line” for officers to have lethal rounds at the school.

David Houston, an attorney who is representing Clark’s family, thanked those for their support and prayers for the boy and his family but said there are many questions that need to be answered, namely why non-lethal force wasn’t used.