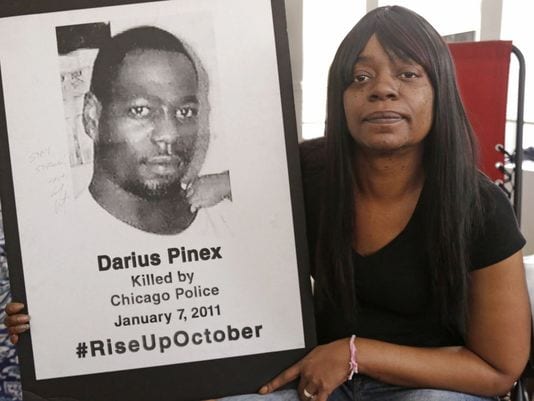 Gloria Pinex holds the photo of her son Darius Pinex, 27, who was fatally shot by police in 2011. (Photo: M. Spencer Green/AP)

The city of Chicago is prepared to shell out more than $5 million in lawsuit settlements filed by the families of two men fatally shot in separate police-involved shootings, according to court documents.

Chatman, 17, was shot and killed by police in 2013. According to police, Chatman stole a silver Dodge Charger on Jan. 7, 2013. When confronted by plainclothes officers Kevin Fry and Lou Toth, Chatman fled on foot. Video footage released earlier this year shows Fry firing four times on the teen as he ran. Chatman was struck twice and died as a result of his injuries. 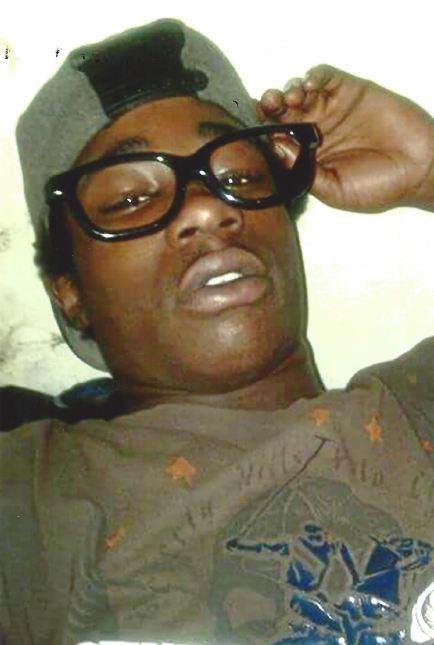 Fry stated during a deposition that he believed Chatman had a gun. When the teen turned his body slightly towards Toth, Fry opened fire thinking that Chatman was aiming to shoot his partner. Chatman was found to be holding a black iPhone box he allegedly stole during the carjacking.

The shooting was captured on video by a police camera and surveillance cameras at a nearby high school.

Chatman’s family filed a complaint against the Chicago Police Department in 2013, alleging cops doctored reports in order to clear the officers involved and that the city aimed to keep video footage under wraps as it contradicted the officers’ accounts.

Though the family’s attorney, Brian Coffman, refused to comment on the settlement ahead of Monday’s meeting, he did offer some thoughts in June during settlement talks.

“This will be another expensive lesson for the city,” Coffman told the Chicago Sun-Times. “If they don’t change how they do things, well, there’s a bigger societal issue that needs to be discussed.”

In the second case set to be settled by the city, police were initially cleared in the civil lawsuit brought by Pinex’s family over a 2011 traffic stop turned deadly.

Phenix, a father of three, was stopped because his Oldsmobile Aurora fit the description of a car other officers attempted to stop after a shooting, according to police. Pinex was ordered out of the car by Officers Raoul Mosqueda and Gildardo Sierra, but instead he threw it in reverse, nearly striking Mosqueda. The two officers both fired multiple rounds at the car, with a bullet from Mosqueda’s gun striking Pinex in the head and killing him. A loaded pistol was found underneath the driver’s seat.

The case was originally heard by a federal jury last year which determined that Officers Mosqueda and Sierra were justified in shooting Pinex.

In January, however, U.S. District Judge Edmond Chang ordered a retrial after discovering a city attorney had withheld crucial evidence in the form of a dispatch recording from the plaintiff’s attorney.

In Mosqueda’s and Sierra’s testimonies the officers said they learned about Pinex’s Oldsmobile through a recording relayed over police radio. The officers said dispatch indicated the suspect had fled from an earlier shooting and was armed; however, the actual dispatch recording made no mention of a prior shooting or the status of the suspect, thus undermining police testimony.

Chang said city attorney Jordan Marsh knew about the recording before the trial but “intentionally concealed” its existence. Marsh resigned the same day the new trial was ordered. In addition, Chang said Marsh’s co-counsel, Thomas Aumann, failed to make “reasonable inquiry” into the recording after it was requested by the plaintiff. Aumann also resigned prior to the start of the new trial.

In addition to the new trial, Chang also ruled the city and specifically Marsh were responsible for paying the entirety of the plaintiff’s attorney’s fees from the first trial.

The Chatman video footage and allegations of misconduct by city attorneys in the Pinex case surfaced just days apart in January as the city was still dealing with protests stemming from video footage released in the fatal police shooting of Laquan McDonald, 17.