Yoko Ono: 'We are turning this beautiful country into a war zone' 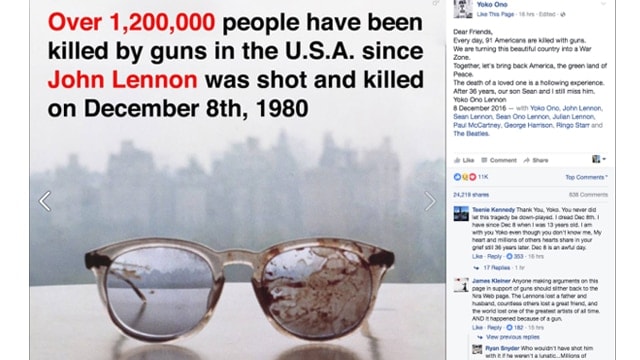 Yoko Ono, John Lennon’s widow, pointed to gun death fatalities and called for peace ahead of the 36th anniversary of her late husband’s shooting death.

“Dear Friends, Every day, 91 Americans are killed with guns. We are turning this beautiful country into a War Zone. Together, let’s bring back America, the green land of Peace. The death of a loved one is a hollowing experience. After 36 years, our son Sean and I still miss him.”

The associated meme included a famous photo of Lennon’s blood-soaked glasses with a statistic above it. “Over 1,200,000 people have been killed by guns in the U.S.A. since John Lennon was shot and killed on December 8th, 1980.”

Though there was no explicit call for gun control in Ono’s message, Breitbart writer Awr Hawkins went after Ono’s post.

“Ono is pushing the same, tired mantra that so many contemporary gun controllers propound in their efforts to secure more background checks. Chiefly, that ’91 Americans are killed with guns…every day,'” wrote Hawkins, saying “Ono is pushing gun control 30 years after the fact without understanding that 1980 and 2016 are worlds apart.

In a story that ran last year, the Daily Mail reported that Lennon’s killer, Mark David Chapman, legally bought the Charter Arms .38-caliber pistol in Hawaii, before somehow getting it to New York City, where he gunned down the former Beatle.

Chapman bought the gun for $169 just six weeks before the murder. While the purchase was legal, it wasn’t legal for him to bring it to New York City.

In August, Chapman was denied parole for a ninth time.

“Your actions have devastated a family and those who loved the victim,” the parole board said in a 2014 denial.