Weaponized robots: Are machines the future of American policing? 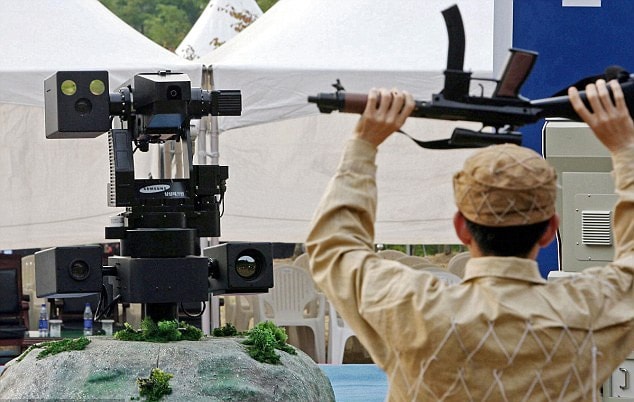 The SGR-1, a robot created by a Samsung subsidiary, is currently in use on the border of North Korea and South Korea. The bot features a machine gun that only fires if authorized by a human operator. (Photo: Getty Images)

After gunning down five Dallas police officers during a Black Lives Matter march in July 2016, Micah Johnson took shelter in a nearby parking garage. After hours of negotiations broke down between Dallas police and Johnson, officers made an unprecedented decision to put an end to the gunman’s rampage — with a robot.

Police loaded a pound of C4 explosives onto a Multi-Functional, Agile, Remote-Controlled Robot (MARCbot), drove the bot towards Johnson’s location and detonated the charge. In that moment, the use of remote lethal force became yet another tool in the American law enforcement arsenal.

The success of the Dallas incident and the lack of legal repercussions following signaled to police commanders that these so-called “tactical robots” could be a viable option to quell future violence. According to Ben Miller, an engineer for drone-maker Draganfly, Dallas clearly “demonstrated that, tactically, the use of a robot with lethal force is viable.” Though its easy to let imaginations run wild with images of a Terminator-like future full of genocidal robots, modern day technology is a little more lackluster.

Engineers with Israeli firm General Robotics unveiled a new tactical robot called Dogo at the Eurosatory 2016 defense show in Paris this past June. The 25-pound machine can scout dangerous environments, use its two-way voice communication to facilitate negotiations, feed video of targets to police and fire at targets. Equipped with a point and shoot interface, the bot also features an integrated Glock 26 that allows operators to fire on suspects without actually being present on the scene. General Robotics claims its robot would shorten response time and allow for “clean kills.”

A subsidiary of Samsung has its own version of a tactical robot, called the SGR-1, currently in use on the border of North Korea and South Korea. Equipped with cameras to automatically detect and track targets, the SGR-1 also comes loaded with a 5.5mm machine gun and 40mm grenade launcher. While it can blow the hell out of anything that moves, it can only do so with operator authorization.

As fictionalized as these weaponized robots seem, these machines are now poised to take American policing to a new level. However, critics are calling into question the ethics involved in autonomous lethal force.

American Civil Liberties Union policy analyst Jay Stanley told Politico that he is concerned that weaponized robots could make pulling the trigger too easy — something he said is unsettling at a time when it seems police are too quick to do that already.

“Does this remain something that is only used in extraordinary circumstances,” Stanley asked. “Or do police departments start clamoring for robots specifically designed to use force?”

“Let’s say there’s a protest, and there aren’t any police on the scene and a robot starts spraying pepper spray, or tear gas, or rubber bullets, on the crowd, and they do it with poor situational awareness and they hit people who are not involved, or they do it when it’s not necessary,” he added. “Often, the way new technologies play out on the ground is not the way you would expect.”

This does beg the question — are new laws needed to govern these machines? Some states, to include Oregon Virginia and Wisconsin, say yes and have already taken measures to ban agencies from arming drones.

North Dakota, so far, is the only state in which police are legally permitted to arm drones, though only with less-than-lethal ammo such as tear gas, bean bags and Tasers. In states with no laws, departments are left to make their own determinations on the topic.

Though a majority of states don’t govern the use of weaponized robots, most departments limit these specialized weapons to only SWAT teams and police emphasize that the rules governing use of of force still apply.

“I am still legally responsible for having to explain and justify [any] level of force,” Thor Eells, chairman of the National Tactical Officers Association, told Politico. “The mechanism of how the force is delivered is irrelevant to the courts.”

While the influx of robots into civilian law enforcement can be attributed to the Pentagon’s 1033 program, which allows the military to transfer excess military equipment to civilian agencies, the use of robots is still new.

Though the Dallas robot was not acquired through the 1033 program, it is the first reported incident of police using an armed robot to subdue a suspect.

With at least 280 law enforcement agencies in the U.S. in possession of military robots, the ACLU’s Stanley said communities should be concerned about the implications of these weaponized bots within their communities. “This has started a whole new conversation,” he said. “It’s worth pausing to think about what it means for us as a society.”