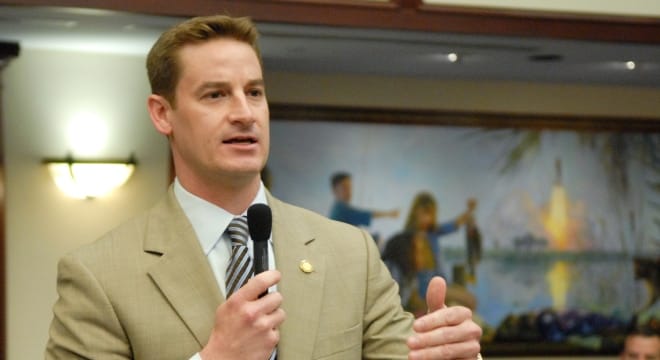 A Republican lawmaker has filed a bill that would make Florida the 46th state to adopt lawful open carry of handguns while dropping a number of mandated gun free zones.

The measure, filed late Friday by the new head of the Senate Judiciary Committee, Greg Steube, R-Sarasota, would modify state law to allow for open carry as long as one had a valid concealed carry permit.

Steube’s measure, SB 140, is sweeping in the respect that it not only authorizes Florida’s 1.6 million concealed carry permit holders to carry openly, but also trims away a number of long standing gun free zones. Among the areas affected would be secondary schools, career centers, and local government meetings.

Despite some of the most pro-gun laws in the country, Florida is just one of five states in the country that ban open carry and are in the same club that includes California, New York, South Carolina and Illinois. Florida allowed open carry until 1977.

The Florida Supreme Court is currently reviewing the 2012 case of a who was found guilty by a lower court for the open carry of a weapon outside of his home after his handgun, which he had a concealed carry permit for, became visible. With a ruling in that litigation likely before the start of the 2017 legislative session, lawmakers may be forced to codify a change should the high court strike the ban.

Legislation to pass open carry in the last session became a litmus test for law enforcement, with the Florida Police Chiefs Association supporting the move in a 15-7 vote while the Florida Sheriffs Association had 47 of 67 member sheriffs opposing the measure. Each side had very vocal champions with Pinellas County Sheriff Bob Gualtieri contending open carry is fundamentally dangerous and Brevard County Sheriff Wayne Ivey arguing openly armed citizens represent a direct deterrent effect on crime.