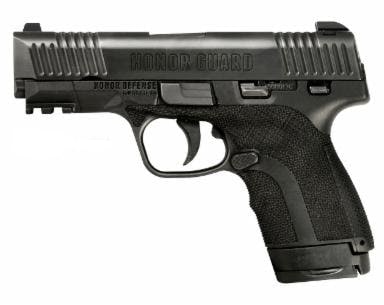 The Long Slide model is slightly larger than the original Honor Guard, but still offers the same level of concealment as its predecessor. (Photo: Honor Defense)

Honor Defense made a splash earlier this year with its new sub-compact pistol the Honor Guard and the company intends to continue to expand on the line now offering a long slide version.

The striker fired, long slide model is chambered in 9mm and is +P rated. Built on same modular stainless steel chassis as its sub-compact sibling, the long slide model is also equipped with the same CNC machined striker block, striker housing and barrel.

Weighing it at 26 ounces with a 3.8 inch barrel, the new model falls easily into the concealable market. Snag-free sights work with concealed carry and with over 100 holster partnerships, consumers have a bevy of choices when it comes to toting the gun on-body.

Available with or without a manual thumbs safety, the long slide version features an ambidextrous magazine release and slide catch. The single stack pistol ships with an eight round and a seven round magazine, two back straps and a cable lock.

Touting fast, accurate shooting paired with rugged reliability and comfort, Honor Defense’s products are all American made — going so far as to only use domestic materials and stainless steel parts made in the U.S. In addition, every pistol is hand-assembled and tested by veterans.