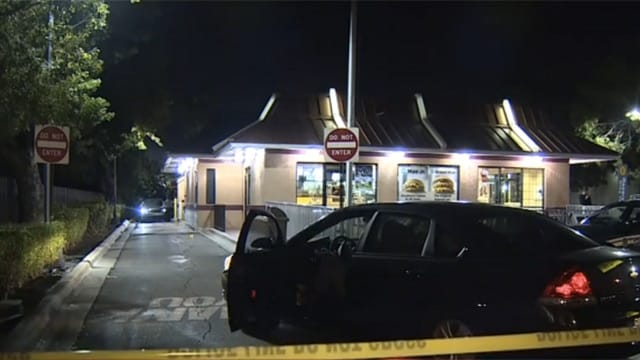 Authorities say the man who shot another during a fight at a McDonald’s drive-thru in Hialeah, Florida, acted in self-defense, according to local reports.

Victor Hugo Saavedra, 22, won’t be charged for shooting and injuring 21-year-old Sergio Hernandez on Dec. 5 as investigators determined the shooting was justified.

According to reports, Saavedra pulled up to the drive-thru to find Hernandez standing at the window with his girlfriend, 20-year-old Vanessa Puenta, as they talked to a McDonald’s employee.

Saavedra honked his horn, which apparently angered Puente who responded by running up to the car and hitting the driver’s side window. Saavedra then got out of his car and Puente started punching him in the face. Moments later, Hernandez joined by hitting Saavedra in the back of the head.

At that point, Saavedra tried to call the police, but Puente reportedly knocked the cell phone out of his hands. As the couple continued to attack him, Saavedra pulled a Glock 9mm, which had previously been concealed, from his waistband and fired a single round, striking Hernandez in the pelvis.

When police arrived on the scene, Hernandez was transported to the hospital for medical treatment. His injuries were determined to be non-life threatening and he is expected to recover.

Hernandez and Puente, who at the time of the attack was out of jail on a felony bond stemming from an unrelated incident, are both facing charges for battery. Puente faces an additional witness tampering charge for knocking the phone out of Saavedra’s hands.

Saavedra, who authorities confirmed had a valid concealed weapons license, will not face any charges. He declined to talk to reporters.