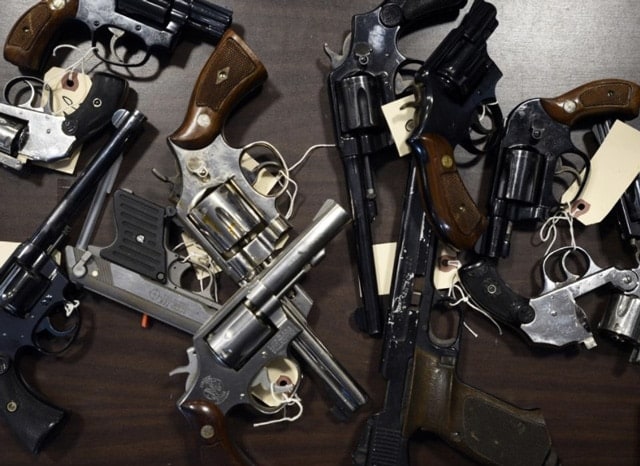 Authorities in central Massachusetts collected a total of 260 firearms, including 38 replicas, during the “Goods for Guns” gun buyback over the weekend.

The buyback served 17 communities and was the biggest yet, according to Dr. Michael P. Hirsh, medical director of the City of Worcester Division of Public Health and a pediatric trauma surgeon at UMass Memorial Medical Center.

“You can’t always stop the causes of violence – poverty, racism, patterns of abuse…etc., but But one thing that will help is if the access to lethal means is reduced,” said Dr. Hirsh, who lost a colleague to a random act of gun violence more than three decades ago.

Those participating in the buyback were awarded gift cards from local businesses: $25 for a rifle or shotgun, $50 for a handgun, and $75 for an automatic weapon.

Altogether, 102 handguns were turned in, along with 91 rifles and 29, unspecified, semi-automatic weapons. Additionally, 38 replicas – including pellet guns and toy guns – were handed over to authorities.

Dr. Hirsh said there is an increase in replicas being used in the commission of a crime and said 35 percent of guns used in crimes are stolen during residential burglaries.