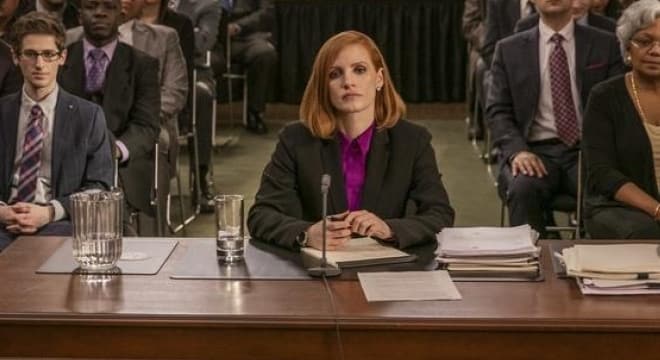 It’s limited release on November 25 was something for the record books.

According to Box Office Mojo, the film ranks #78 on the top 200 worst opening weekend per-theater averages since 1982, just beating out 1986’s “GoBots: Battle of the Rock Lords” and 1994’s Hungarian animated film “The Princess and the Goblin.”

In wider release starting last Friday, it came in at 11th place behind the WWII action biopic “Hacksaw Ridge,” now in its sixth week at the box office, and ahead of the Danny Glover seasonal comedy “Almost Christmas” in its fifth week of release.

Reviews this week of the film by and large tend to like Chastain’s performance, but feel the flick itself is predictable, unendearing and in some cases, bordering on modern fantasy:

“‘Miss Sloane’ delivers a message wrapped inside a bit of a mess,” – Lawrence Toppman, Charlotte Observer.

Audiences seem to grade the film about midway. On IMDB the movie has a 5.9/10 rating which squares with a 6.5/10 rating on Rotten Tomatoes.

So far, the film has earned just over $2 million against an estimated $18 million budget.