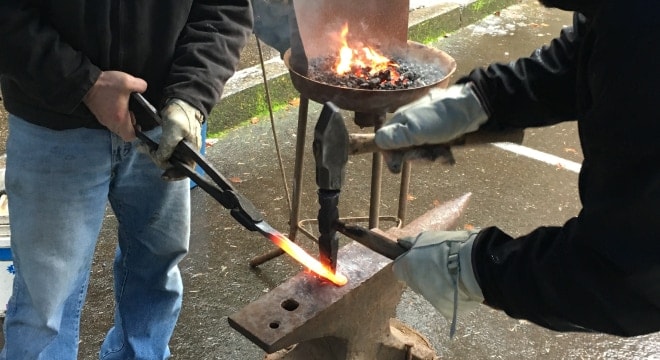 Working with RAW Tools, Rev. Lucas was able to get enough metal out of the AR to make a pick/mattock. (Photos: Rev.Lucas)

The priest who coughed up $3,000 in a charitable raffle so that the AR-15 would not get a chance to run free and “be used to kill kids in schools,” has successfully turned the gun into a garden tool.

We’ve brought you the story of Rev. Jeremy Lucas of Christ Church Episcopal Parish in Lake Oswego, outside of Portlan, Oregon, earlier this year.  To recap, Lucas used money from his parish’s discretionary fund to pump up his chance to win an AR-15 being raffled to benefit a local girl’s softball team in July.

Once he won the gun, he proudly announced it would be turned into a non-functional art object to prevent it from being, “used to kill kids in schools, kill people in a movie theater, kill people at an office party or at any other place of mass shootings.”

This led to calls by Republican lawmakers and local gun rights advocates to investigate and prosecute Lucas under the state’s new and confusing expanded background check law after he asked a parishioner to store the gun while he arranged its transformation into a garden tool without first going through a mandated check.

Ultimately, authorities declined to bring the clergy member up on charges citing a lack of any evidence after he declined to give a statement to detectives.

Now, with the legal troubles apparently in the rearview, Lucas assembled at the church with RAW Tools, a group that specializes in recycling unwanted firearms into garden implements, and converted the AR-15 into a pick in a ceremony Friday that included hymns and scripture.

“We took a weapon designed to kill human beings, an AR-15 semi-automatic assault rifle,  and turned it into a tool for cultivating and growing food,” noted Lucas on his blog.

The tool will be given to the Newtown Action Alliance on the upcoming 4th anniversary of the Sandy Hook massacre.

“Although this gun will never be used to kill anyone, it would take almost 1000 years to destroy just the guns in the United States right now using our method,” said Lucas. “We destroyed this gun to highlight the idolatry with which we worship guns in America.”

Kind of a cool looking pick. I mean, you could buy a better one from Home Depot for like $18, meaning Lucas could have bought 166 of these and donated them to a worth cause. Buy hey..