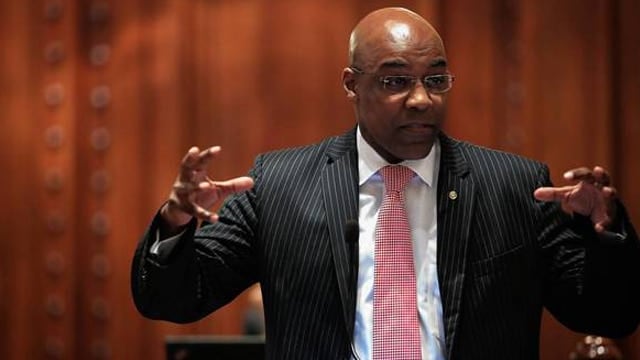 As violence in Chicago reaches a level not seen in decades – more than 700 murders so far in 2016 – one state senator says he’ll introduce a bill next month that would impose harsher sentences for repeat gun offenders.

In July, State Sen. Kwame Raoul, a Democrat, stood with Chicago Police Superintendent Eddie Johnson at a press conference to introduce the idea. A press release for the event noted that “more than 50 individuals involved in shootings and murders this year would have been in prison at the time of the incident if tougher sentencing policies were already in place.”

In August, Raoul said the Violent Gun Offenders Sentencing Act will be “data-driven” and would create a sentencing guideline for judges that would encourage more jail time for people who are routinely convicted of gun crimes.

“So if you’re giving 3-14 (years of prison time) for unlawful possession of a weapon by a repeat offender, you can push toward the higher range of that sentence,” Raoul said, according to DNA Info. “You can target, through the data, which offenders should serve longer sentences.”

The bill would not impose strict minimums, says Raoul, and judges would still be able to use their discretion as they hand down sentences. But the bill might make judges explain their rationale, putting added pressure on them to act a certain way.

Johnson has long called for harsher sentencing, and says most of the city’s violence is a result of the actions of about 1,500 people – all of them catalogued in the department’s so-called “strategic subject list.” Getting more of those people behind bars for longer periods of time would help the city with its gun violence problem, Johnson has said.

Johnson said the intent of the bill isn’t to go after responsible gun owners, but to focus on people “who tell us, ‘I don’t care.'”

Still, critics see such legislation as damaging for minority communities – the very areas plagued by violence in Chicago. In 2013, a bill failed that would have imposed three year minimum sentences for any felon or gang member caught in public with a loaded gun. Black legislators worried it would lead to more African Americans in jail, and the NRA said the bill would see problems for law-abiding citizens.

“Increasing prison terms while failing to address the causes of gun violence will serve only to, once again, demonize and incarcerate another generation of mostly young African-American and Latino men,” wrote Cook County Public Defender Amy Campanelli in a September op-ed in the Chicago Tribune, saying efforts like Raoul’s could lead to a “war on guns” that would resemble the “war on drugs.”

President Obama, a man who sat in the very same seat Raoul now holds in the Illinois Senate, is working to undo years of sentencing policies that have seen nonviolent drug offenders locked up for decades. And Raoul agrees with the legislative black caucus in his chamber – they don’t want to increase mandatory minimums.

But by using police data to target specific repeat offenders, Raoul says he’ll walk this fine line to try to help slow the violence on his city’s streets.