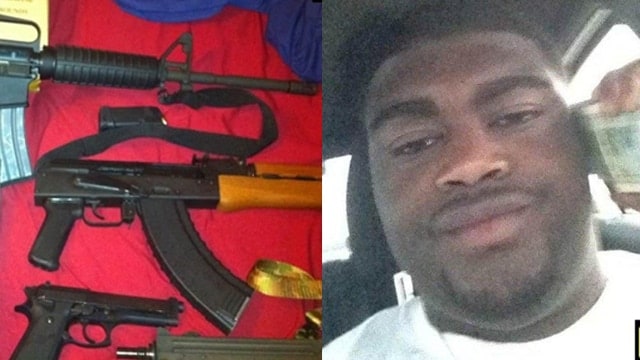 Rejecting a convicted gunrunner’s argument Friday, an appeals court in Chicago reaffirms that photos posted to social media can be used against you in court.

David “Big Man” Lewisbey argued that Facebook photos of him with guns shouldn’t have been admissible, but a three-judge panel disagreed, according to the Chicago Daily Law Bulletin. They upheld his 2014 convictions for selling hundreds of guns in Chicago after buying them at Indiana gun shows.

At trial in 2013, prosecutors relied heavily on images Lewisbey had on his phone, as well as photos he posted to Facebook. On the stand, Lewisbey portrayed himself as more of a drug dealer, not a gunrunner, saying he was a gun enthusiast simply adding to his collection.

“I spent the majority of my time selling weed, going to school and working at Home Depot,” said Lewisbey, according to the Chicago Tribune.

But prosecutors said Lewisbey delivered as many as 43 guns to a man with gang ties during a 48-hour stretch in April 2012. Those guns were eventually sold to a government informant. According to one government witness, Lewisbey bought more than 100 guns at Indiana gun shows.

Lewisbey’s attorney pushed for a three-year prison term, saying Lewisbey had no serious previous criminal history. But the judge disagreed, and handed down 16 years and 8 months.

“He’s had a part in some killings, no doubt,” said U.S. District Judge Ronald Guzman when he sentenced Lewisbey in May 2014. “When you provide the tools, you are setting in motion a series of events, and you can’t just play ostrich and stick your head in the sand and say, ‘That’s not my doing.’”

The appeals court on Friday found there was no doubt Lewisbey posted the photos to Facebook, since some of them were also found on his phone. They upheld his convictions.