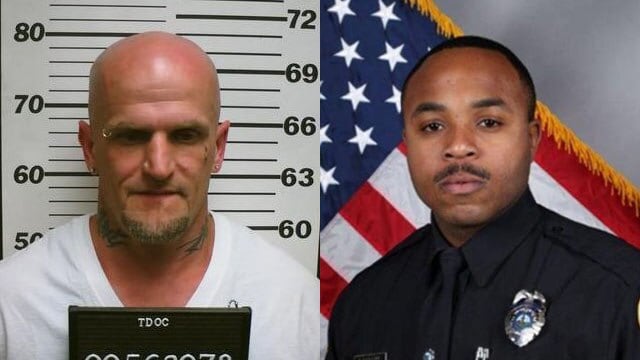 A police officer in Nashville is recovering after a man shot him in the shoulder Tuesday morning before turning the gun on himself.

Someone at a motel called police early Tuesday to report a man in room 104 who talked about committing a robbery. Nashville Police officers Terrance McBride, 28, and Ky Luu, 29, responded to the call and arrived at the motel a little after 5 a.m. When they went to 43-year-old Paul Hardesty’s room, a woman opened the door and admitted she was a heroin user. She said she was alone in the room, but McBride and Luu quickly realized that wasn’t the case.

McBride found Hardesty in the bathroom and told him to show him his hands. That’s when Hardesty shot McBride in the shoulder with a sawed-off 12-gauge shotgun. Police say Luu opened fire so McBride could retreat and both officers left the room. They heard Hardesty fire another shot, allegedly self-inflicted.

During the melee, the woman who was in the room with Hardesty fled the scene.

“It was so loud I could hear the vibrations coming through the floor,” said Ronnie Patrick, according to The Tennessean. Patrick was staying in a nearby room.

Police used a robot to search the room, eventually finding Hardesty’s body in the bathtub.