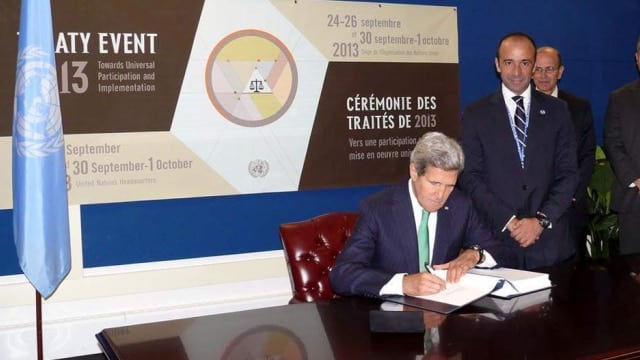 In 2013, the U.S. signed the UN Arms Trade Treaty, though Congress has not ratified it and has promised not to do so. (Photo: un.org)

President Obama transmitted the controversial Arms Trade Treaty, which seeks to regulate the world’s annual exchange of $70 billion in conventional weaponry, to the Senate on Friday.

The Senate would have to pass the ATT with a two-thirds majority and at least 50 Senators went on record soon after Kerry’s action by sending the White House a bipartisan letter stating they would not sign the pact, leaving it to stagnate in the State Department.

Now, with just a few days left at work doing the People’s business in Washington, Obama is making a final appeal to the lawmakers, holding that the declaration will not affect gun rights.

“It will contribute to international peace and security, will strengthen the legitimate international trade in conventional arms, and is fully consistent with rights of U.S. citizens (including those secured by the Second Amendment to the U.S. Constitution),” he noted in his Dec. 9 message, going on to say the treaty will help eliminate the illicit trade in weaponry that can be used overseas in “to carry out the world’s worst crimes, including genocide, crimes against humanity, and war crimes.”

The president holds the treaty respects national sovereignty to deal with conventional arms inside their own borders and is “fully consistent with the domestic rights of U.S. citizens, including those guaranteed under the U.S. Constitution.”

Allen Youngman, executive director of the Defense Small Arms Advisory Council told Guns.com previously he didn’t think the treaty would be ratified because the U.S. is already complying in terms of carefully scrutinizing export license applications, a key goal.

Even if the treaty should somehow navigate its way to approval by the Senate, individual states have chaffed at its tenets.

In April, Republican Gov. Bill Haslam signed a popular bill prohibiting the enforcement of international laws — such as the ATT — in the state that could affect the Second Amendment. In 2013, Texas Attorney General Greg Abbott, now governor of the Lone Star State, promised to slap the federal government with a lawsuit if the treaty was ratified.

The National Rifle Association tweeted on Tuesday, “The Obama Admin just sent the UN Arms Trade Treaty to the Senate, but it has nowhere to go but the trash.”

The Senate’s targeted date to end the 114th session sine die is Dec. 16, though it may do so before then. The House already has recessed for the year.