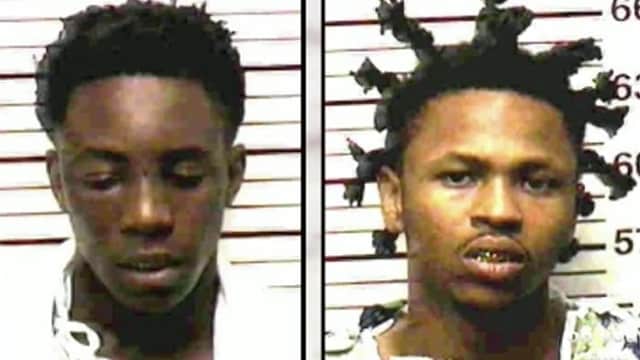 A firearm stolen from a Tampa gun store during a recent smash and grab robbery has been recovered from murder suspects who were arrested Sunday.

The handgun was linked to the robbery and the suspects to the murder of a 27-year-old woman after they were arrested for leading deputies on a chase in a stolen car, according to the Polk County Sheriff’s Office.

Jayvon Joachin, 16, and Deshawn Miller, 17, appeared in court Wednesday on murder charges. They were wanted in connection with the shooting death of Kendra Lewis, who was killed in front of her 5-year-old daughter as they sat inside their car at a gas station parking lot on Dec. 7.

Authorities determined the handgun was one of the 40 or so stolen from Tampa Arms on Nov. 29. During the robbery, a dozen suspects ransacked the store after gaining entry by driving an SUV through the front window. However, it’s unclear if the recovered handgun was connected to the murder or if the teens participated in the robbery.

The Polk Sheriff’s Office said the teens stole a Dodge Charger from a convenience store parking lot on Dec. 10 after the owner left it running as he went inside the store. Deputies immediately launched an investigation and arrested the teens six hours later when the car was spotted on a nearby highway. The teens crashed the car after hitting “stop sticks” laid out by deputies, and then treated for their injuries at a local hospital before their arrest.

Joachin, who was the driver, confessed to the homicide and stealing the car, the sheriff’s office said, adding he had three Swiss-Tech window punches, a common tool used to break windows during burglaries, on him when he was arrested. The stolen handgun was found in the immediate vicinity of Miller, who rode in the passenger seat.

The teens, who have both accumulated lengthy criminal records, will also be charged with grand theft of a motor vehicle, felony possession of a handgun, burglary, and other charges. They are currently being held in a juvenile detention center without bond.

Citing their lengthy criminal histories and the heinousness of their crimes, authorities said they want both Joachin and Miller tried as adults.

The gun shop burglary was captured on surveillance video and showed an SUV crash through the store front. Then, eight to 12 suspects rolled out of the vehicle and cleared the shop in less than a minute. Officials have ramped up efforts to urge gun shop owners to take precautions and prevent theft.

“Just simply locking the door or setting the alarm isn’t enough unfortunately,” ATF Agent David Brown told local media, adding any firearms that are on the walls or otherwise on display need to be taken down and stored in a safe when the business is closed.

Likewise, Polk County Sheriff Grady Judd said, “I believe that gun stores have an ethical and moral obligation to the community that when they lock that store up at the end of the day that those guns are so secure.”