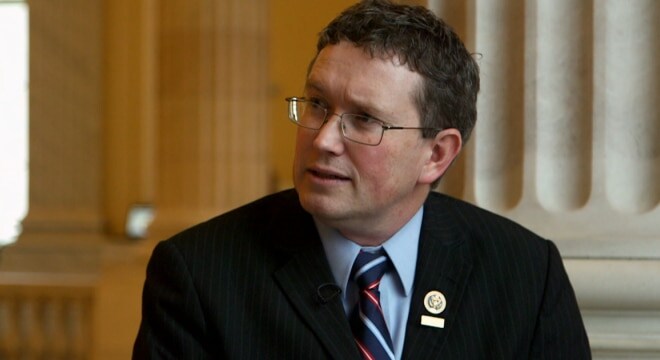 U.S. Rep. Thomas Massie of Kentucky has reformed the Second Amendment Caucus in the House with an eye to going on the offensive for gun rights. (Photo: The Libertarian Republic)

A group of conservative U.S. Representatives has banded together to form a caucus that will work towards shepherding a host of pro-gun bills in the new Congress.

“The recent election results present us with a new opportunity to advance pro-gun legislation and reverse the erosion of the Second Amendment that’s occurred over the last few decades,” Massie said in a statement. “I look forward to working with the new President and this determined group of conservatives to promote a pro-gun agenda.”

Massie, a Libertarian-leaning conservative who supported U.S. Sen. Rand Paul over Donald Trump for president and received endorsements by Gun Owners of America, is a long-time concealed carry permit holder and Class III weapon collector who thinks the right to keep and bear arms has nothing to do with duck hunting.

“In fact, the Second Amendment to our Constitution is our Founding Fathers’ restatement of our natural God given right to defend life, liberty, and property,” he said on his campaign website.

While in Congress, the lawmaker and engineer by trade cosponsored legislation to allow veterans to buy unlicensed guns while abroad and bring them back to the county, efforts to roll back Washington, D.C.’s gun laws and “assault weapon” ban, and measures to ease restrictions on transporting firearms and ammo across state lines. In 2013, he was the only congressman to vote against the Undetectable Firearms Act to mandate the inclusion of metal in plastic guns.

Massie told CN2 good firearms legislation has been left to molder in the House this session and that needs to change. “We probably have 50 bills in Congress that have been sitting dormant because we knew the president would never sign them,” he said. “Instead of being on the defensive, we’re going on the offensive.”

Among the priorities for the group will be suppressor deregulation, curbing gun free zones and expanding concealed carry protections.

The new group is separate from the Second Amendment Coalition formed by President-elect Trump, which includes six U.S. Representatives as co-chairs, none of which are a part of the Massie caucus.

Besides sponsoring legislation, the members of the new group plan to invite pro-gun organizations and speakers to address the caucus. A statement from Massie’s office carried remarks from Second Amendment attorney Alan Gura — who has steered several gun rights cases to wins in front of the U.S. Supreme Court — and economist Dr. John Lott whose research into gun crime and statistics are widely cited in the gun rights community.