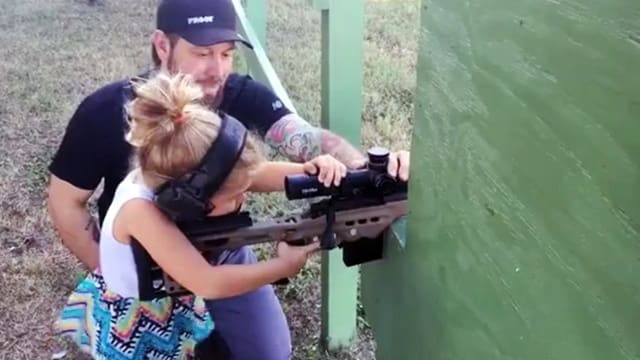 Buck Holly holds a .223 caliber PRS Tac Rifle while his four-year-old, Noah, lines up and shoots at a range. (Photo: Facebook)

A custom gun shop owner is getting some attention for a video he posted to Facebook earlier this month that shows him helping his 4-year-old daughter fire a rifle at a shooting range.

Buck Holly runs C&H Precision Weapons in La Belle, Florida. In the video, posted Dec. 3, it’s clear his daughter Noah knows what she’s doing. Buck holds the gun for the girl and talks her through the process. She pulls back the bolt and loads another round before looking through the scope and firing. As any good dad would, Buck cheers for Noah, offering her a heartwarming daddy-daughter high five after she nails the target, before eagerly loading another round.

“Oh, you’re gonna do another one?” he asks her, as she works to load the .223 caliber PRS Tac Rifle.

“Mmhmm,” she says, before hitting the target again.

People on the internet had mixed reactions to the viral video.

“I’m all for teaching kids to be safe with guns and to know how to behave around them, but if they’re too young to eve hold the gun properly then they’re too young to shoot it in my opinion,” wrote Daina Souter on Facebook. “Yes, he’s teaching her the right things, but if something goes wrong and the gun kicks or misfires and she’s not holding it right because she’s so small.”

Holly was clearly holding the gun in the video, and it didn’t have any significant kickback. Most other commenters were supportive of Holly, saying it’s important to teach kids about guns when they’re young. Still, Holly chimed in, addressing those who were critical of the video.

‘I would invite each and every one of (my critics) to come to the range with me and my family and participate in it. See how things really happen,” said Holly. “They got to see a 30 second snippet of a little girl shooting. What they don’t see is the preparation that goes into it. They don’t see her asking and begging for more ammo. So I would tell my critics, feel free to criticize me. That’s our lifestyle. But before you criticize, come and try it and experience it for yourself.”