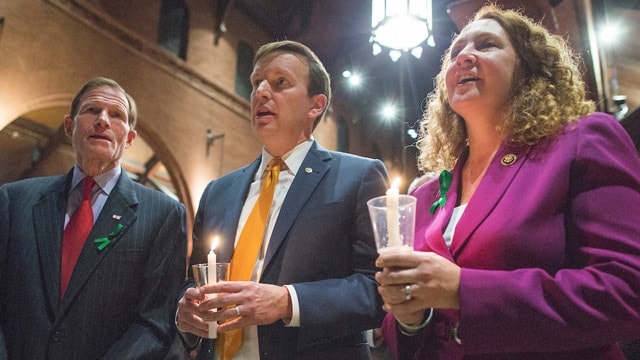 Marking the fourth anniversary of the Sandy Hook massacre Thursday, a group of Democratic lawmakers from Connecticut rallied for gun control on Capitol Hill.

More than 80 relatives of gun violence victims joined the lawmakers. They remembered the 20 children and six adults killed at the elementary school in 2012, and talked about the political reality of their agenda in the wake of last month’s election.

“Shortly we’ll have a new president,” said Connecticut Sen. Richard Blumenthal, according to The Hill. “Unlike President Obama, he is hardly committed to the cause of ending gun violence.”

“We have to play defense,” said Connecticut Sen. Chris Murphy, noting the NRA’s support of Trump.

“The NRA is clearly going to make a big ask of Donald Trump early in 2017. We don’t know what it is yet,” Murphy said. “We can guess that it might be a national concealed weapon law. But the NRA clearly is going to want something in return for their early support of Trump.”

NRA CEO Wayne LaPierre has called on Trump and Congress to pass concealed carry reciprocity, which would allow a right to carry nationwide. Trump has said he supports the idea.

Murphy and Blumenthal, along with Rep. Elizabeth Esty and Rep. Rosa DeLauro called on Trump to support expanded background checks and allow victims of gun violence and their families to sue firearms manufacturers. They also called on him to ban terrorists from buying guns.

Blumenthal noted Trump’s unpredictable nature is the only indication he might switch views on gun control.

“I know people are so frustrated, so mad that we haven’t been able to make more progress in four years,” Murphy said. “But I think it’s, frankly, understandable that we are in for a long fight.”