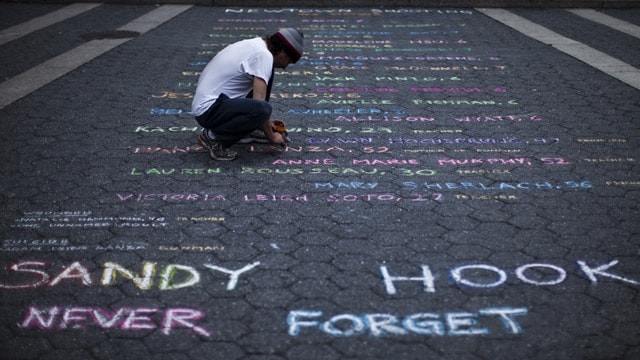 Street artist Mark Panzarino, 41, prepares a memorial as he writes the names of the Sandy Hook Elementary School victims during the six-month anniversary of the massacre, at Union Square in New York, June 14, 2013. (Photo: Eduardo Munoz/Reuters)

PoliceOne “editor at large” Doug Wyllie wrote Wednesday, on the fourth anniversary of the Sandy Hook school shooting, reporters should “devalue” mass killers and deny them the notoriety they seek.

The editorial is the latest in the debate about how often media outlets should identify rampage killers for fear of spawning what researchers call the “contagion effect” — essentially, copycat incidents.

Wyllie writes about his own news organization’s missteps in covering Sandy Hook four years ago and how responsible reporting on mass shootings, including downplaying the suspect, remains an important piece of discouraging such acts in the future. But, he argues, news coverage alone can’t take all the blame.

“The fact is, the news consumer — the American public — creates an enormous demand for information about the killer in all murders, and even more so in the case of rapid mass murder,” he wrote. “This demand is virtually impossible for the news media to resist.”

The intense media coverage of mass shooting incidents — from Columbine High School to Virginia Tech to the Pulse Nightclub — have spawned multiple social media campaigns to encourage media outlets to strictly limit the use of the accused killer’s name and instead focus on the victims.

The “Don’t Name Them” campaign, a collaboration between Texas State University, the I Love U Guys Foundation and the FBI, says it recognizes the balance between journalistic duty and sensationalism, arguing a line should be drawn early-on in a shooting event’s aftermath.

“It is journalistically routine to name the killer. It’s public record. And it is important to use their names and likenesses to apprehend them and bring them to justice,” the campaign writes on its website. “But once they are captured, it’s really no longer a part of the story, other than to create a call to action for a like-minded killer to take his plans and thoughts and make them into deeds.”

Wyllie wrote he “totally agrees” with Don’t Name Them, hence why he only uses a shooter’s name once in any article and for all subsequent mentions, he uses terms such as assailant, gunman, attacker, or terrorist.

Other high-profile news reporters have taken the criticism a step further and refused to name the killer entirely, such as CNN’s Anderson Cooper, who omitted the name of the Orlando Nightclub shooter during his coverage for the network in June.

Not every news outlet, however, agrees withholding names and motives of mass shooters is a “responsible decision.”

In a 2014 editorial, Al Thompkins, Senior Faculty for Broadcast and Online at Poynter, criticized Sun News in Canada for its policy of refusing to name the suspect or investigate his motivations in an attack that left three Royal Canadian Mounted Police officers dead in New Brunswick.

Sun News said “scouring” the killer’s Facebook page and speculating motive “could actually encourage the perception that his heinous acts are somehow justified.”

“The policy sets up a false dichotomy,” Thompkins said. “Either be irresponsible and speculate or don’t report at all. It ignores the possibility that full, thoughtful reporting might lead to understanding and even prevention.”

Thompkins then referred to investigative reports from PBS Frontline and The Hartford Courant in the wake of Sandy Hook that explored the shooter’s motivations, “how he grew up and what we could learn about him that could help us understand what lead up to the Sandy Hook shooting.”

“When we explore who the killers are, we come to more clearly understand their motives,” he said.

Washington Post columnist Erik Wemple implored other reporters to “ignore” the Oregon sheriff’s request because deep investigations into the lives of mass shooters “is a public service, not some nefarious ‘glorification’ quest.”

“And yes, it’s more critical to stopping future shootings than ‘focusing on the victims,” he said in an Oct. 2, 2015 editorial.

Wyllie said Wednesday he can’t control how CNN, the New York Times and other major news outlets report on mass shootings and doesn’t expect public demand for the coverage of such incidents will go away.

“In this day and age of an instant-gratification need for information on the part of the news media and the public, it is an impractical proposal that the killers’ names are simply buried and never uttered,” he wrote. “But we can all do a better job of shifting the focus and refraining from sensationalism.”