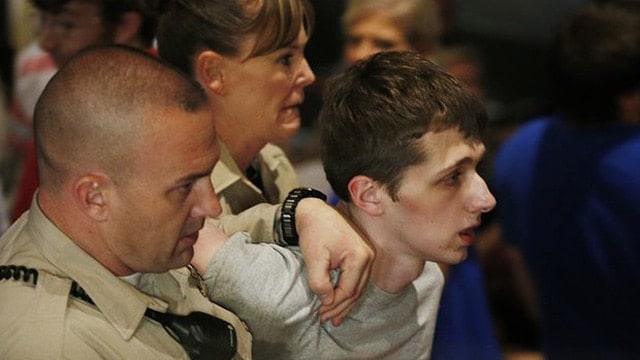 Michael Sandford suffers from an array of physical and mental ailments and his family hopes he can get the care he needs. (Photo: AP)

The British man who tried to grab a gun from a police officer during a Donald Trump rally over the summer was sentenced in a Las Vegas federal court this week to one year in jail.

Michael Steven Sandford, 20, of Surrey, England, pleaded guilty in September of being an illegal alien in possession of a firearm and disrupting an official function. Had the case gone to trial, Sandford could have faced up to 20 years in prison, according to The Guardian.

At the time of the incident, Sandford had been in the United States illegally for a year and a half, was unemployed and living in his vehicle.

During a June rally in Las Vegas, Sandford unsuccessfully attempted to grab an officer’s gun. He was arrested and told authorities he was there with the intention to kill Trump.

An investigation later revealed that Sandford drove from California to Las Vegas, where he visited a gun range just days before the Trump rally to learn how to use a gun, before such time he had no prior experience.

At the rally, Sandford never gained possession of a gun, no shots were fired and no one was injured. Despite his admission, the judge did not believe Sandford would have successfully carried out an assassination.

“You have a medical problem. You should not be ashamed or embarrassed about it. You need medication,” Judge James Mahan said in court, speaking to Sandford.

“You’re not a hardened criminal. You’re not evil or a sociopath like a lot of people we have. I don’t think you wanted to kill anybody. This was just some crazy stunt that your mind told you to do,” Mahan added.

According to Sandford’s family, he suffers from autism, obsessive compulsive disorder, severe depression, seizures, cardiac issues and Crohn’s disease. Likewise, Sandford’s attorney, Saimo Chahal, claims his client was delusional when he went to the Trump rally.

Sandford, who was reportedly on suicide watch numerous times during his incarceration, was both apologetic and said to be relieved at his sentencing.

“I know saying sorry is not enough. I really do feel awful about what I did,” Sandford told the court. “I wish there was some way to make things better. I have cost taxpayers so much money. I feel terrible.”

He also apologized to the judge for “taking up so much time.”

Sandford’s mother said her son is “extremely vulnerable” and his “actions were completely out of character.” She is pushing for him to serve his time in the UK where he can also receive psychiatric care.