Shooting outside of Hells Angels’ New York club under investigation 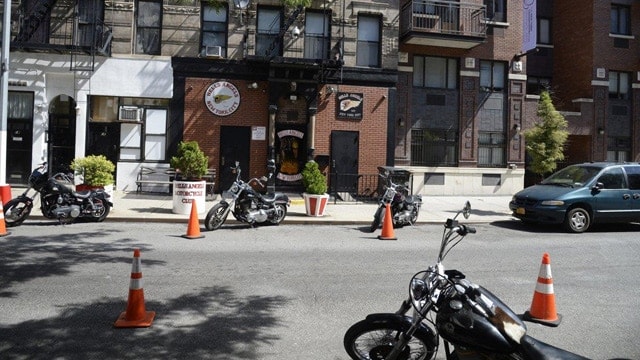 Authorities say the club repeatedly and illegally places cones outside of the building to save parking spaces for their motorcycles. (Photo: Jefferson Siegel/New York Daily News)

The infamous Hells Angels biker club has been refusing to cooperate with authorities after a man was shot outside their New York clubhouse early Sunday morning.

Authorities say 25-year-old David Martinez was shot in the stomach during a brawl that broke out as he and his friends tried to drive around a cab double-parked outside the organization’s East Village clubhouse, according to local reports.

New York Police officials reportedly identified the shooter as a biker “prospect” with a hat with the word “dad” on it. Investigators think they will be able to match the suspect’s DNA with evidence recovered from Martinez’s boot. Also, officers recovered surveillance video of the incident along with weapons — a pair of brass knuckles and a knife — that are believed to belong to members of the motorcycle group.

The fight broke out shortly after 1 a.m. when a man attacked Martinez for moving a traffic cone that blocked off space for motorcycles. But as Martinez’s three buddies jumped out of the car to aid their friend, a slew of people poured out of the clubhouse and a melee ensued. At the time, Martinez and his friends said they did not know the clubhouse belonged to the Hells Angels and they were just trying to drive around the double-parked vehicle.

Joseph Gray, one of Martinez’s friends, said the fight quickly escalated and he found himself pulling a chain out of the trunk and swinging it. The prospect pulled out a handgun and fired one shot after Martinez knocked him to the ground and started kicking him.

Martinez’s girlfriend, 26-year-old Brittany McDonald, remained in the car during the brawl, but drove him to the hospital. There, medical personnel removed a .380-caliber bullet from his gut. Although in severe pain, Martinez survived and remains in stable condition.