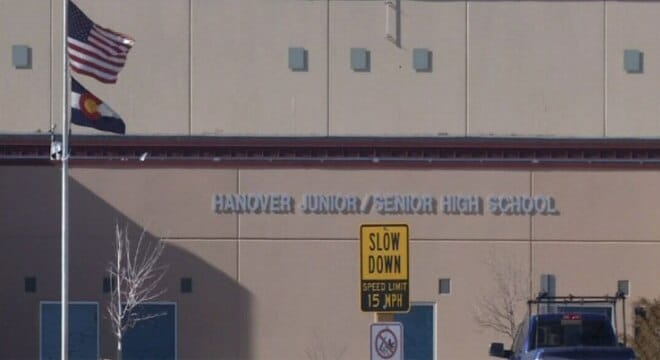 The Hanover School District Board of Education voted 3-2 to allow teachers and staff with a concealed carry permit to volunteer and receive additional training as armed school security. (Photo: KOAA)

A rural school district in El Paso County, Colorado, on Wednesday approved a resolution to allow staff to carry guns on school grounds after a survey of students, staff and parents found support for the move.

The Hanover School District Board of Education conducted the survey in October and found a narrow consensus toward adopting such a policy, which passed Dec. 14 in a 3-2 vote.

The District, which has two schools, is about 30 miles outside of Colorado Springs.

The resolution passed by the board would allow current school employees to volunteer to receive extra assignments as a security officer. Those selected would have to obtain a concealed handgun permit and receive an additional 24 hours of training to meet insurance standards for armed school employees.

The board noted that at least two districts in Colorado have similar resolutions in place already. One district allows for armed hired security staff, while the other allows trained staff to be assigned collateral armed security duties. Both options are allowed under the Colorado law.

In Briggsdale, a rural school district north of Denver, about four out of the school’s 18 employees went through security officer certification in 2013.

In 2014, the Democrat-controlled Colorado House Judiciary Committee voted down a Republican-backed proposal would have allowed staff with concealed carry permits to have their guns on campus without any further training requirements.

Not all in Hanover are happy with the decision.

“Safety is our No. 1 priority,” Board President Mark McPherson told The Colorado Springs Gazette. “Our rooms are supposed to be locked and secure, we have cameras, we have a very vigilant staff. We are authorizing teachers to pull a weapon and kill a human being, and I cannot support that.”

The details of the district’s plan, including who will pay for it and if additional training past the minimum will be required are still being hashed out.