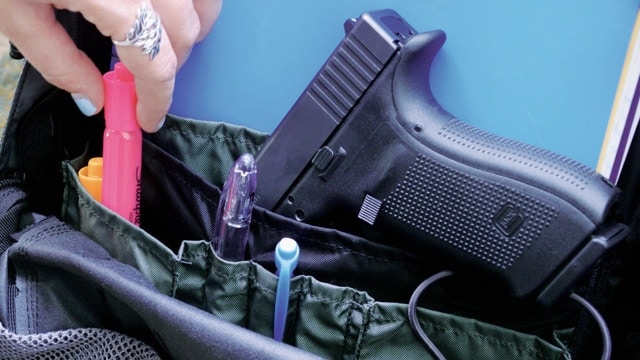 The board says lawmakers should take the hint after years of failed proposals allowing guns on campus. (Photo: Raenesha Thompson)

The editorial board at the Gainesville Sun published a piece Thursday condemning continued proposals that would see guns on college campuses in Florida.

“Just as First Amendment rights don’t allow someone to yell fire in a crowded theater, the Second Amendment doesn’t allow for a limitless right to carry a firearm anywhere,” wrote Gainesville Sun opinion editor Nathan Crabbe, speaking for the editorial board. “Even campus-carry proponents concede this point, given that (Senate Judiciary Chairman Greg) Steube’s proposal would retain bans on carrying guns into police stations, jails, courtrooms, polling places and most bars.”

Stuebe introduced one of several campus carry measures for the upcoming session despite similar bills failing the previous two years. One bill would allow guns on campuses, in airport terminals, at K-12 schools and in government meetings. Another bill focuses only on college campuses and airport terminals.

“When such measures look reasonable in comparison, we’re in trouble,” writes the board.

“Putting more guns in the hands of young people who are facing the stresses of classes and new relationships is a recipe for disaster,” says the board. “Guns are more likely to be used in accidental shootings than preventing mass shootings. Students or university employees who lack training in preventing such incidents could shoot the wrong person or cause confusion when police respond to the scene.”