Investigation into Oklahoma City airport shooting comes to a close 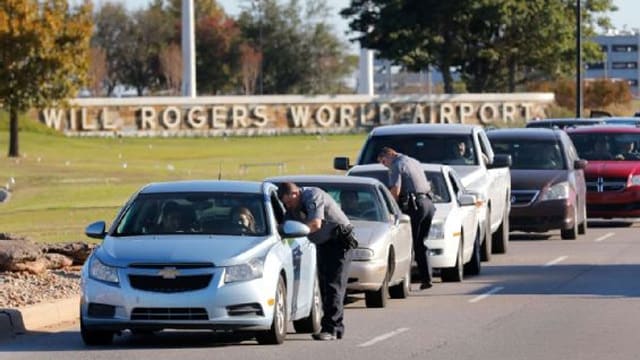 Authorities believe the shooting was an act of workplace revenge. (Photo: AP)

Oklahoma City police released a possible motive for last month’s deadly shooting at Will Rogers World Airport as their investigation came to a close this week.

The investigation revealed that the shooting in which former Southwest employee Lloyd Buie killed one person before turning the gun on himself was likely an act of workplace revenge, authorities told local media.

According to the investigation, Buie was angry with supervisors who had asked him to take an alcohol test in April 2015 after he exhibited signs of being drunk at work. He refused and instead opted to resign.

Authorities also released details from surveillance video that captured the moments leading up to the Nov. 15 shooting. The videos show Buie park his truck in the airport’s parking garage on Nov. 11 and then leave in a cab four hours later. Then, on the day of the shooting, Buie walked to his truck at 10:24 a.m. and then at 12:45 p.m. he’s seen firing a single shot from a high-powered rifle from the parking deck.

Authorities said the shot killed Southwest employee Michael Winchester, 52, as he was walking to his car inside the parking garage. Buie fired from about 50 yards away. Buie then returned to his truck about 45 minutes later where he turned the gun on himself.

When police arrived, Buie was pronounced dead at the scene. Winchester was transported to the hospital but died soon thereafter. During the investigation, authorities found a handgun along with the rifle inside Buie’s truck and even more guns and ammo at his house.

Winchester, who had been with the company for 29 years, was the father of Kansas City Chiefs long snapper James Winchester.

Authorities are convinced that Buie’s actions were premeditated, but remain unsure whether Winchester was specifically targeted or chosen at random.