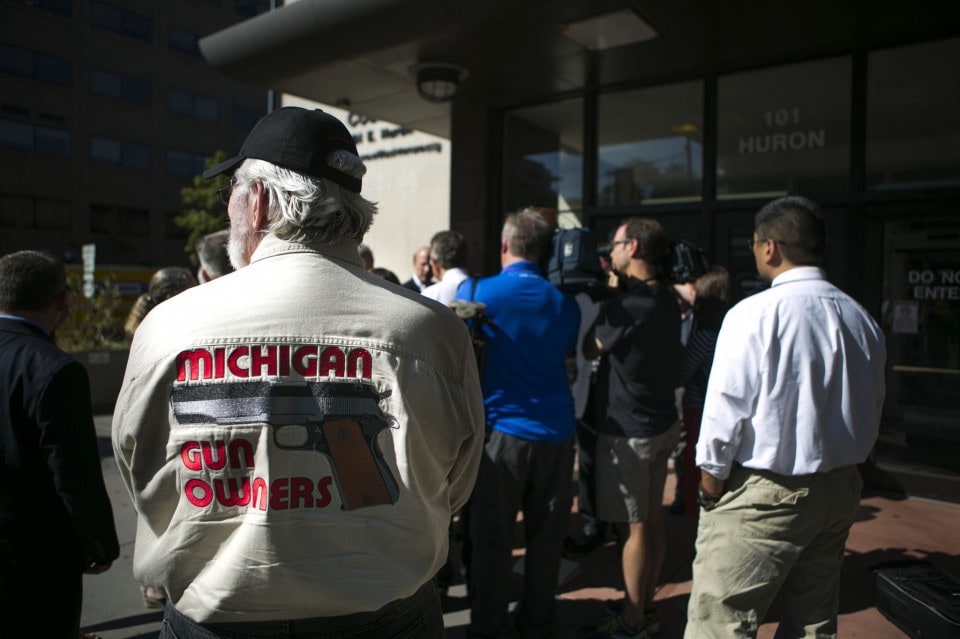 Mike Thiede of Michigan Gun Owners looks on at a press conference in September regarding gun bans in schools. (Photo: Dominic Valente /The Ann Arbor News)

Despite state law allowing guns on school property, Michigan school districts can ban firearms from schools and events, according to an opinion handed down this week by the Michigan Court of Appeals.

“The issue presented is whether state law preempts Clio Area School District policies banning the possession of firearms in schools and at school-sponsored events,” the opinion says. “We hold that it does not, and reverse the judgment of the circuit court.”

The district brought the case to the state’s appellate court after losing to gun rights organization Michigan Gun Owners in 2015. The initial ruling sided with the organization’s interpretation of state law that allows for concealed carry permit holders to carry either open or concealed firearms on campus. The lower court said schools cannot prevent legal permit holders from carrying on school grounds.

Yet, the organization brought similar arguments against Ann Arbor in 2015, but a state court dismissed the case saying state law does not define a school district as a local unit of government.

Attorneys from both groups argued before the appellate court on Tuesday. Michigan Gun Owners’ attorney Jim Makowski asserted that state law prevents local governments from regulating the possession of firearms.

“The law is clear no local unit of government can regulate firearms,” Makowski said. “I don’t know what is more local than a school district.” He argued that schools enacting gun-free policies create a “patchwork” of unique rules across the sate that create confusion and “burden” the police and public.

In Thursday’s ruling, the court said that the legislature empowers schools to provide safety to students and that parents can easily adapt to school regulations. “Indisputably, the Legislature recognized that different school districts would employ different methods and strategies to accomplish this goal,” the opinion says. “Most parents easily learn and adapt to the policies and procedures applicable to their children’s schools and district. We discern no possibility of meaningful ‘confusion’ or burdening of law enforcement.”

Makowski told reporters he was disappointed by the decision but not surprised. “It’s just wrong-headed thinking. No law is going to stop the next mass shooting at a school. It’s silly to think otherwise,” he said. “No one wants the next Columbine.”

Michigan Gun Owners said on social media it plans to bring its cases to the Michigan Supreme Court.