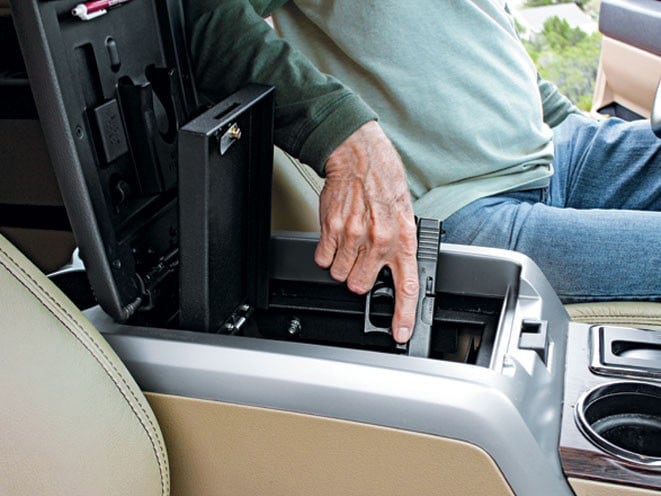 The Nebraska Supreme Court clarified an existing law regarding concealed carry in cars by non-permit holders, ruling that guns must be stowed in a location that is completely unavailable to the driver at all times.

Under the existing law, concealed carry permit holders may carry in their car; however non-permit holders must lock up any firearms so that they are not “within immediate physical reach” of the driver. Nebraska’s high court took that a step further Friday outlining that these guns must also be inaccessible even while the vehicle is stopped.

The decision centers on a 2015 case involving Joseph Senn Jr., a Missouri resident who was pulled over while driving through Nebraska. Senn was stopped due to his suspected involvement in a fatal shooting in Missouri, of which he was later acquitted.

At the time of his arrest, Senn was found to have a loaded 9mm semi-automatic handgun inside a case under the passenger seat of the rental U-Haul truck he was driving.

Former Richardson County Sheriff Randy Houser testified in court that the firearm was inside a case. That case was found “against the wall of the truck — between the passenger seat and the right side wall of the truck, partially behind the seat with some clothing on top of it,” and that “ it was completely on the other side of the cab” from the driver’s seat.

A deputy also testified that given the location of the gun in the box, Senn would not have been able to reach the gun while driving.

Despite police testimony, the jury found Senn guilty of unlawful concealed carry. He was fined $200 plus court costs.

Senn appealed his misdemeanor gun conviction and, in a split decision, the Nebraska Court of Appeals overturned it. The appellate court ruled that though the handgun was hidden, it was out of Senn’s reach while driving; therefore it did not meet the state’s definition of concealed carry.

Not satisfied with the appellate court’s decision, the state elevated the case to the Nebraska Supreme Court. Assistant Attorney General George Love argued that the mere presence of the gun under the passenger seat met the state’s definition of concealment. She pleaded with the high court to review the case and clarify what constitutes concealed carry of guns in cars.

The high court took on the appeal and issued its unanimous opinion Friday. In that opinion, the Supreme Court said that the lower court focused too heavily on the gun being out of reach while Senn was driving and not on the fact that Senn could access the handgun while the truck was stopped.

“We conclude that the jury, as a rational trier of fact, could have found that the handgun was on or about Senn’s person, even though it was not within his reach while driving,” Supreme Court Judge Max Kelch wrote.

This decision builds upon and clarifies a previous ruling made by the state’s Supreme Court in 1984 in which justices determined that a firearm must be “within immediate physical reach” to be considered concealed. Another prior decision by the court stated immediate reach would also include storage of guns in locked glove compartments.

Senn’s attorney Keith Kollasch said the decision against his client was not only disappointing but confusing and concerning for gun owners transporting guns in and through the state.

“How do you transport a firearm in Nebraska, then?” Kollasch asked. “You’re pheasant hunting, you’ve got a firearm in a case, outside your reach. Under this ruling, they could probably charge you with a concealed weapons charge.”

While Rod Moeller, president of Nebraska Gun Owners Association, wouldn’t comment on the opinion he told the Omaha World-Herald that he advises gun owners to either get a state concealed carry permit or place their firearms in a case out of reach of the vehicle’s seating compartment.