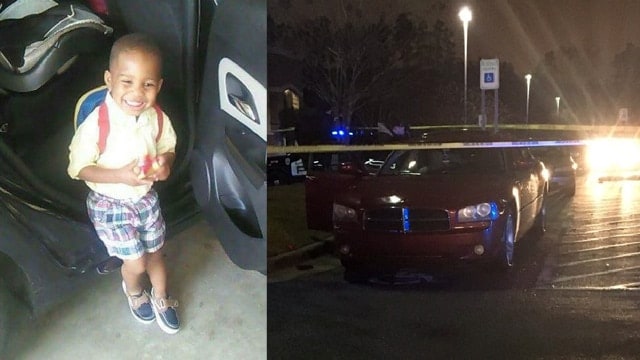 Police say 3-year-old Acen King, left, was shot Saturday night while on a shopping trip with his grandmother. (Photo: Twitter/KATV)

Police in Arkansas are looking for a man who shot and killed a 3-year-old during a road rage incident Saturday evening.

Police say Kim King-Macon, 47, was waiting at a light in southwest Little Rock when a someone in a car behind her began honking. It was raining, and King-Macon honked back while she waited for traffic to pass. That’s when a black man got out of the black Chevy Impala behind her and fired once into her car, striking King-Macon’s 3-year-old grandson. The boy, identified as Acen King by a family pastor, was taken to the hospital where he died, according to the Arkansas Democrat-Gazette.

A 1-year-old was also in the car during the shooting, but that child was not injured. King-Macon had been taking the children on a shopping trip Saturday.

“This is about as frustrating as you can be as a public safety official or just a plain citizen,” said Little Rock Police Department Chief Kenton Buckner.

It’s the second child to be shot and killed in Little Rock in the last month. On Nov. 22, a 2-year-old was killed when several bullets were fired into the car she was riding in.

Police are offering a $20,000 reward for information that leads to the arrest and conviction of the shooter.