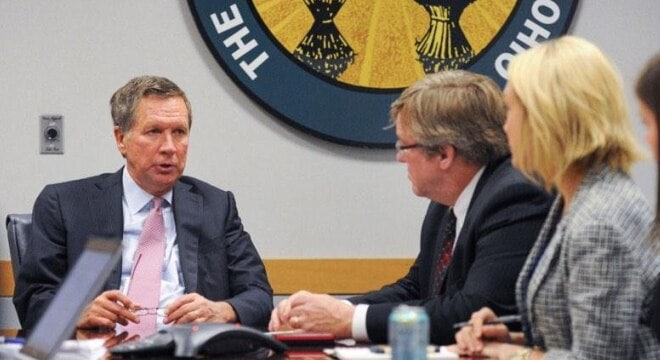 Gov. John Kasich this week signed a number of pieces of legislation including one that is seen as a victory for gun rights. (Photo: Ohio Press Sec)

Ohio Republican Gov. John Kasich signed a sweeping gun bill on Monday that will expand concealed carry and modify a number of gun free zones, including those at schools, airports and day care centers.

Kasich did not comment when he signed the bill, which was originally intended to expand carry rights for active duty troops but had been heavily amended to include language from other pro-gun legislation leading some to call it a “guns everywhere” bill.

The most controversial tenets of the new law allows concealed carry permit holders to bring firearms inside school safety zones as long as the guns are in their vehicles, and gives colleges and universities the authority to allow for campus carry. Gun control advocates and university leaders testified against the measure in the final days of session and actively lobbied Kasich to veto it if passed.

Yet, both national and state gun rights groups welcomed the news of its passage, weeks after an attack on the campus of Ohio State University sent nearly a dozen to the hospital. The National Rifle Association called the law a “victory,” and the Buckeye Firearms Association said it was “pleased” to see the bill signed into law.

The bill passed the House 68-25 and the Senate 22-8 earlier this month. Ohio Sen. Joe Uecker, R-Miami Township, designed legislation two years ago around a case where a constituent who had served in the military was barred from carrying a handgun as a civilian because he was too young to apply for a permit.

“Protection of our Second Amendment Rights must be take seriously, and my sponsorship of this legislation reflects the wishes of many of my constituents,” Uecker said in a statement.

“This honors the extensive firearm instruction that our service men and women undergo during their military training,” he added.

The new law will take effect in about 90 days and, according to the National Conference of State Legislatures, will add Ohio to the list of 23 other states that allow some form of campus carry.