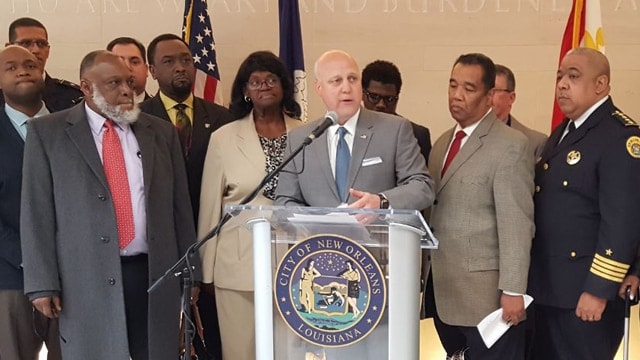 New Orleans Mayor Mitch Landrieu announced more than $13 million in settlements Monday for lawsuits related to four men who were killed by police before and after Hurricane Katrina in 2005.

In all, 17 plaintiffs received settlements, ending all civil lawsuits pertaining to the police killings. Landrieu said it took more than 11 years to reach the settlements because criminal cases had to happen first. He apologized to the victims’ families Monday afternoon at a news conference.

“On behalf of the city,” the mayor said, “I want to officially apologize to you publicly.” Landrieu said he apologized to the victims’ family members privately, but felt it was important to do so publicly.

“This is unprecedented!” said attorney Mary Howell of the apology. Howell represented the family of one of the victims and was at Monday’s press conference.

“There were angels among us that we never knew,” said Landrieu, talking about the days after Katrina as the city streets were under water. “But evidently, there were demons as well.”

The mother of a teenager killed on the Danziger Bridge on Sept. 4, 2005 says she accepts Landrieu’s apology.

“Since that time, it has been an awful long and rough road. But me and my family got through it,” said Sherrel Johnson. “Now this is closure for me, and I can go forward … because I know the old New Orleans does not exist anymore.”

Johnson’s 17-year-old son James Brissette was one of six people shot on the bridge that day. One other man was killed and four others were injured in the shootings. Eleven officers pleaded guilty to charges related to the bridge killings. According to the Associated Press, police planted a gun, fabricated witnesses and falsified reports.

Five officers were tried for their involvement in the shooting death of 31-year-old Henry Glover, but only one conviction still stands. Glover was shot outside a strip mall before his body was set ablaze in a car.

Robair’s daughter, LaShonda Enclade, said she forgives the city of New Orleans, but struggles to forgive the officers involved.

“The word forgive is a very, very, hard word. … I’m not going to say I can ever forgive them. It’s something to be worked on,” said Enclade.

Hurricane Katrina hit New Orleans in late August 2005 and is said to have been responsible for more than 1,500 deaths.