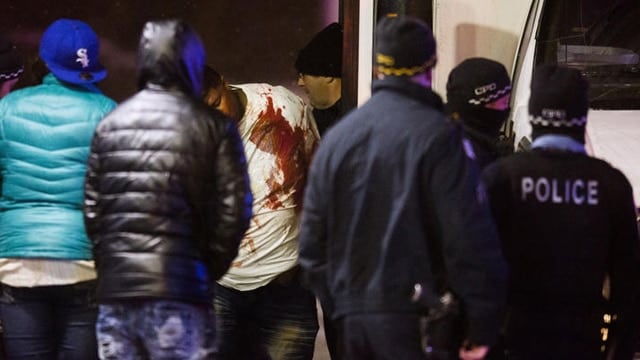 A gunshot victim gets off a party bus on Dec. 18, 2016 in Chicago. (Photo: Armando L. Sanchez/Chicago Tribune)

Three people were injured in a shooting on a party bus over the weekend in Chicago, and the growing trend in party bus violence has officials pointing to a gray area in laws that regulate such vehicles.

Last weekend’s shooting is the sixth gun fight on recreational party buses in the last 14 months in Chicago. A recent ordinance in the city mandates that drivers call police if a person on their bus smokes weed or chucks a bottle out the window, according to the Chicago Tribune. Drivers also have to call police if a gun is fired. And while some companies have rules prohibiting people from bringing guns on the buses, enforcement doesn’t always happen.

On top of that, Illinois concealed carry law says citizens can’t bring guns into bars or places of business that predominantly sell alcohol. But on party buses, passengers bring their own booze. And it’s up to Springfield to legislate where people can and cannot legally carry guns. So it’s murky, and all of this frustrates Alderman Brendan Reilly.

“We’re not doing anything to limit one’s Second Amendment rights because that is covered by state law,” Reilly said. “My personal preference would be that guns are not allowed in party buses.”

The owner of one company says laws and precautions only go so far.

“We can take all the necessary precautions we can, but the fact is the city is violent,” said Elite owner Gabriel Stonys. “We either have to stop operating if it gets too violent and too out of control, or, I don’t know. It’s a tough situation.”

Colleen Daley, the executive director of the Illinois Council against Handgun Violence, is fighting to ban guns in any place in the state where alcohol is consumed.

“We need to make it easy for people to understand that any place where they serve alcohol, firearms are not allowed,” said Daley. “Alcohol and firearms are never a good mix.”