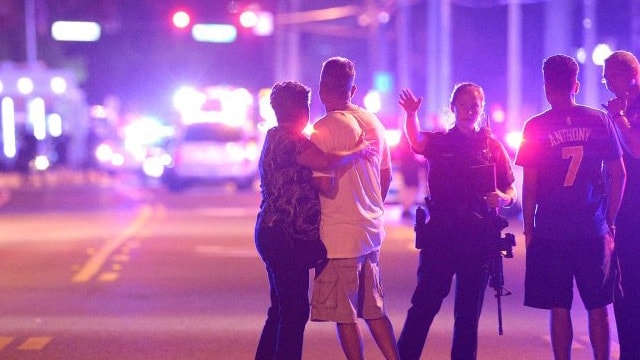 A photo taken on the night of the Pulse nightclub massacre in Orlando. (Photo: Phelan M. Ebenhack)

The families of three victims killed during June’s Pulse nightclub shooting in Orlando are suing Twitter, Google and Facebook, claiming the companies provided “material support” that helped radicalize the gunman.

Responding to the lawsuit, Facebook said, “We are committed to providing a service where people feel safe when using Facebook,” adding, “We sympathize with the victims and their families.”

Twitter didn’t comment on the suit, but in August the company said they had suspended more than 300,000 accounts that had violated the company’s policies on the promotion of terrorism.

The man who pulled the trigger in Orlando, 29-year-old Omar Mateen, pledged allegiance to the Islamic State in phone calls with dispatchers before police killed him in a shootout. The families of three of his victims, Tevin Crosby, Javier Jorge-Reyes and Juan Ramon Guerrero, all filed the lawsuit in Detroit federal court Monday.

The families claim the companies “provided the terrorist group ISIS with accounts they use to spread extremist propaganda, raise funds and attract new recruits.”

In August 2014, “ISIS supporters tweeted over 14,000 tweets threatening Americans under the hashtags #WaronWhites and #AMessagefromISIStoUS, including posting gruesome photos of dead and seriously injured Allied soldiers,” read court documents filed this week. “Some of the photos depicted U.S. marines hung from bridges in Fallujah, human heads on spikes and the twin towers in flames following the 9/11 attacks. Other messages included direct threats to attack U.S. embassies around the world, and to kill all Americans ‘wherever you are.’”

Earlier this month, Facebook, Microsoft, Twitter and YouTube announced they’re creating a database of videos and images they’ve removed from their platforms in an effort to help them track Islamic State propaganda. By sharing the data, the companies say it helps them to identify terrorist imagery, and to remove it if they so choose.