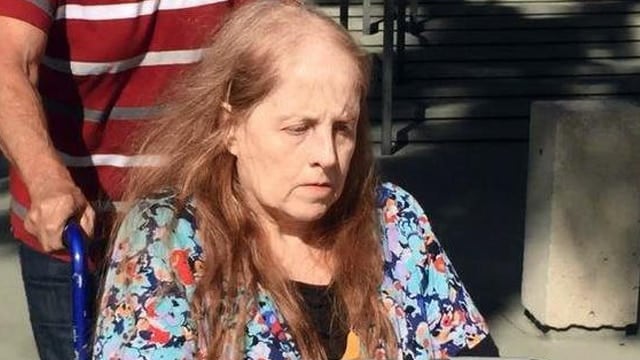 Lucy Richards, 57, as she appeared in court on Monday.

A Florida woman accused of sending death threats to the father of a child slain in the 2012 Sandy Hook massacre pleaded not guilty Monday in federal court.

Lucy Richards, 57, has been charged with four felony counts for transmitting threats to Lenny Pozner, the father of 6-year-old Noah, who was shot and killed at the elementary school.

She’s accused of leaving three threatening voicemails and one email. According to prosecutors, she said in one of the voicemails: “You gonna die, death is coming to you real soon.”

Richards, a former waitress who wore furry slippers in court on Monday, told the judge she’s been on disability since 2004. She told investigators she was angry after she read on the Internet that Sandy Hook was a hoax.

The judge ordered her to stop looking at conspiracy theory websites and let her remain free on $25,000 bond. He also told her to get mental health treatment.

Several family members of Sandy Hook victims have reported harassment by conspiracy theorists. They claim the event was a hoax orchestrated to erode support for the Second Amendment.

If convicted, Richards faces up to five years in prison on each count.