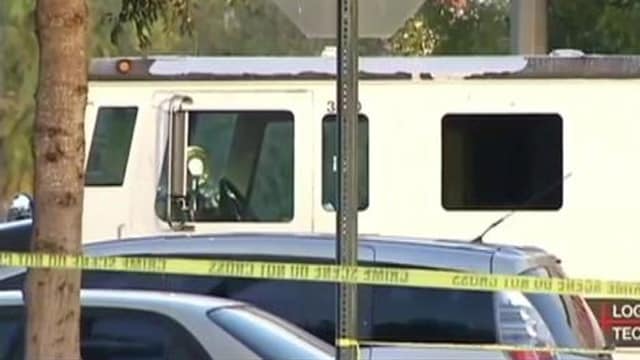 Authorities have reason to believe the robbery was part of an inside job. (Photo: NBC)

An attempted robbery of an armored truck in Homestead, Florida, escalated into a shootout that left one suspect dead, another behind bars and a guard recovering from a gunshot wound.

The attempt unraveled when an armed GardaWorld guard returned fire on a pair of brothers trying to rob him as he delivered cash to a TD Bank late Tuesday afternoon, local media reports.

Police said brothers Edgar Fonseca Morales and Giobel Fonseca Canete were waiting in a parked SUV for the truck outside the bank. Armed with a shotgun and a handgun, they confronted the guard after he stepped out of the truck.

Witnesses said they heard at least half a dozen shots. The guard, who was struck in the hip, shot Morales in the chest and Canete in thigh. Morales died on the scene and Canete escaped the scene in his SUV.

However, a witness followed his SUV while on the phone with 911, so officers were able to quickly locate and arrest Canete, who was transported to the hospital to receive treatment for his injuries.

Canete told investigators that the robbery was attempted with the help of a GardaWorld employee. While authorities are looking into his claim, Canete also faces multiple charges.

The armored truck messenger was also taken to the hospital and is expected to recover.

Authorities said the investigation is ongoing. They think there maybe a third suspect involved who worked for the armored truck company.