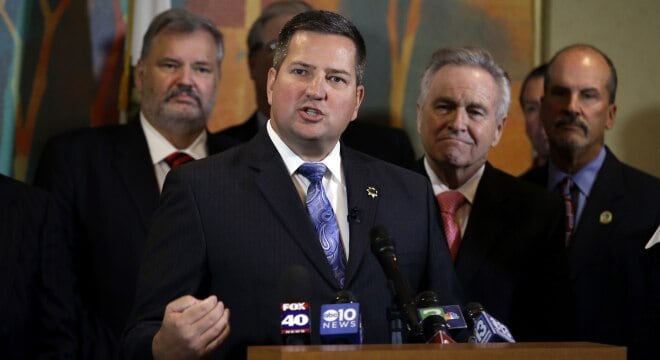 Sacramento County Sheriff Scott Jones, a Republican, wants to make it easier to get a concealed carry permit in the county of 1.4 million (Photo: Rich Pedroncelli/AP)

Concealed carry permit numbers have ballooned in the six years that Sacramento County Sheriff Scott Jones has been in office and now he has plans to make the application process easier.

The agency, which has more permits in circulation than any other in the state, announced Tuesday a more user-friendly process for residents to obtain a permit that will also shorten the time it takes to certify an application.

Jones said the goal is to expedite the process and reduce a current backlog. “It has been difficult to process as many applications each month as we receive,” he told The Sacramento Bee. “This creates an untenable backlog that can get worse over time.”

The changes will allow both first-time applicants and those renewing or modifying permits to conduct their business online and in turn reduce or eliminate the need for several thousand in-person visits to the sheriff’s office each year. Now, instead of two office visits for new applicants, there will typically be just one and renewals will not have to come in at all. Payments will be accepted online, eliminating the need to bring money orders to the office in person.

In addition, the department will issue a hard plastic card with the permit holder’s photo and the number of listed guns will increase from three to five. Jones thinks the new processes can help reduce approval and issue times “by weeks or even months.”

The department had just 350 active requests when Jones took office. Under the previous administration of Sheriff John McGinness, the system was so paltry in granting carry permits that the strict “may-issue” policy was challenged in federal court in 2009.

Since then, Jones has reformed how the county grants permits, moving to a more “shall-issue” system and has 8,493 active CCWs in circulation as of this month. This accounts for more than one-in-10 permits when compared to California’s overall total of some 80,000 licenses, though the county only has 1/28th of the state’s population.

Sacramento has catapulted to the top when it comes to the number of permits it has issued when compared to other agencies. The next highest sheriff departments in terms of active licenses are Fresno with 6,123, and Kern with 6,083, according to figures obtained from the California Department of Justice.

The volume of new permits issued by Jones sparked an effort earlier this year by state Assemblyman Kevin McCarty, a Democrat who represents the area in the legislature, to hike the cost of gun permits statewide. McCarty argued his county had a $250,000 shortfall caused by its permitting program and Jones had so many pending applications that the department had to take a two-month break from accepting new ones in an attempt to reduce the backlog.

Gov. Jerry Brown vetoed McCarty’s bill saying the issue it dealt with was limited to Sacramento county and didn’t need a statewide fix.