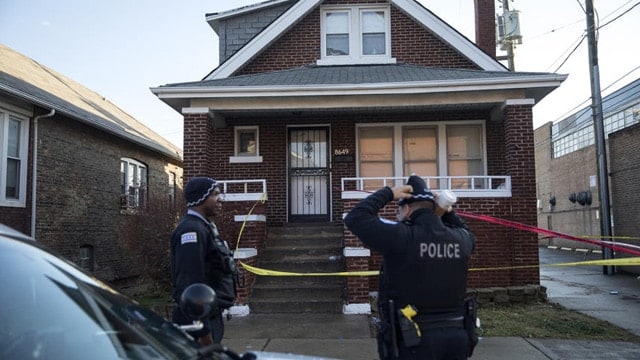 Police on the scene where two brothers were killed and five others injured during a Christmas party in Chicago over the weekend. (Photo: Erin Hooley / Chicago Tribune)

As the year comes to an end, the city of Chicago saw no break in gun violence over the holiday weekend, with at least 50 people shot, 12 fatally, since Friday evening.

The weekend violence pushed the number of shooting victims in the city to over 4,300 so far this year, an increase of more than 1,300 from the previous year, according to data collected by the Chicago Tribune.

Likewise, the number of gun-related homicides in Chicago for 2016 has reached more than 750 so far, the highest number in almost two decades, surpassing the 700 mark previously predicted by County State’s Attorney Anita Alvarez earlier this year. this year’s Christmas weekend alone saw a two-fold increase in fatalities from last year, with a recorded 30 shot and six killed in the same weekend in 2015.

Chicago Police Superintendent Eddie Johnson called the skyrocketing rates of violence “unacceptable” while noting the vast majority of the shootings occurred on the city’s south and west sides, areas notoriously known for gang violence. Johnson also said most of the fatalities – about 90 percent – had known gang ties or prior criminal histories.

“They were targeted knowing fully well that individuals would be at homes of family and friends celebrating the holiday,” Johnson said in a press conference Monday.

Johnson scoffed at the idea of thinking such events or behavior is “okay” or “normal” and advocated for tougher penalties for repeat offenders.

“These gun offenders have repeatedly shown us that they’re not going to play by society’s rules,” Johnson said this week.