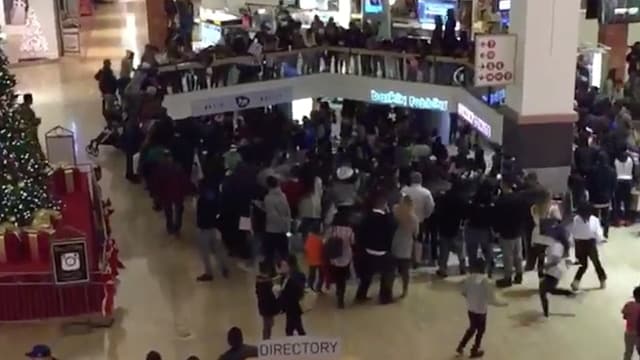 A “big brawl” broke out at Fox Valley Mall in Aurora, Ill. outside Chicago. (Photo: Twitter)

In New Jersey Monday, as many as 10 people were injured after a large fight in the food court. Someone threw a chair and it made a loud noise as it hit the ground, sparking false reports of shots fired. People rushed in a panic to flee the mall as several officers arrived on the scene.

At least seven people were arrested after melees at two malls in Memphis Monday evening. Memphis police couldn’t confirm any coordinated effort, but said there was a lot of chatter on social media about the incidents. One of those malls shut down early after false reports of shots fired.

There were also false reports of a shooting at malls in North Carolina, New York and Arizona, and police at a mall outside Cleveland used pepper spray to disperse a crowd.

A mall in suburban Chicago saw seven arrests after dozens of teens started a “big brawl.”

“They were literally fighting in there, and someone was saying someone had a gun,” said Latoya Ewing, according to WGN-TV in Chicago.  “So we didn’t know, I just tried to round all my children up and get the heck up out of there.”

It’s unclear if any of the incidents are related.