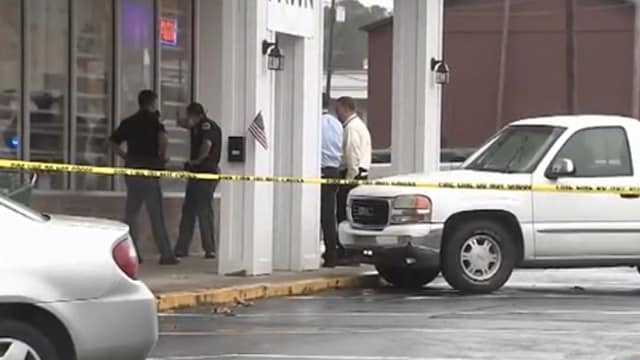 A Georgia gun store owner fought back against two armed suspects who attempted to rob his business Monday morning.

One suspect was left dead and the second remains at large, local media reported, but authorities are hopeful surveillance video that captured the attempted robbery will help them to identify the second suspect.

The owner of Dixie Gun and Pawn had just opened the shop with an employee when the two suspects entered wearing ski masks and armed with guns. Fearing for his safety, the shop owner pulled out his own gun and fired at the suspects, striking one and sending the other fleeing.

The injured suspect collapsed inside the store, while the second suspect drove away in a silver Dodge Magnum, leaving his wounded accomplice behind.

The injured suspect, whose name has not been released, died at the scene. The shop owner, the employee and two customers who were in the business at the time of the incident were not injured.

Authorities took statements from the shop owner, the employee and the customers, who all corroborated the account of what happened. The shop owner told reporters off-camera he felt he had no choice but to fire at the suspects.

Most agree the shop owner’s actions were justified, while others were left wondering what the suspects were thinking trying to rob a gun shop in the first place.

“It’s just amazing to see someone try to come into a gun store to rob a gun store. I mean, that was a really un-thought-out plan,” said customer Terrance Coner while shaking his head.

But Bill Bloedow, who is friends with the shop owner, said crime is high in the area.

“I hope it puts the fear in people going around trying to do this stuff, there is too much crime in this area,” Bloedow said.

Another friend, Victor Harris said the shop owner is very shaken up over the shooting.

“He’s just trying to make a living. That’s all he’s doing, and these guys come in and try to rob you and take your money and your guns,” Harris said, as he expressed sympathy for the shop owner and dead suspect alike.