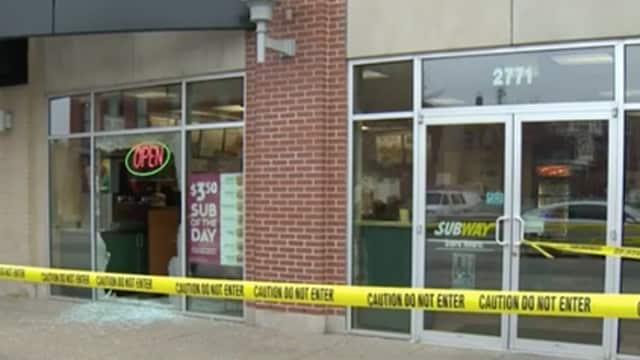 The Subway closed early after the robbery, it’s now back to business as usual. (Photo: WTAE)

A 47-year-old man armed was shot three times while attempting to rob a Subway restaurant in Pittsburg Friday.

Calvin Leon Smith was shot in the neck, chest, and stomach after he entered the business, walked behind the counter and pointed what was later determined to be a BB gun at an employee, local media reported. That employee, however, was legally carrying a concealed firearm and fired first.

Once shots were fired, Smith crawled out of the restaurant through the shattered glass of a front window, then fled the scene in a white Mercedes Benz. He was later dropped off at a local hospital where he was initially listed in critical condition.

Neither the employee who shot Smith or a second employee, who was in the cooler at the time of the attempted robbery, were injured. Neither of the employees’ names have been released, nor did they talk to reporters. Both were able to pick Smith out of a photo lineup, according to authorities.

While Smith was receiving medical treatment, authorities located the Mercedes in which he made his escape and after surrounding the house where it was found, two more suspects – a man and a woman – were taken into police custody after peacefully surrendering without incident. Police say the man was driving, while the woman was in the passenger’s seat, but both claim they only gave Smith a ride and had no idea he planned to commit a robbery.

John Parker Sr., manager of the Asian Fusion Bowl, located next door to the Subway, said the employee who shot Smith is a good worker and a nice person. “He speaks with everybody that comes, walks by. A great person, a great person,” Parker said.

Jacob Booher, who works as a cook at Pita Pit two doors down from the Subway, called the Subway employee “a good dude” who did what he had to do and “took care of business.”

Smith now faces charges for robbery and possessing instruments of crime. It’s unclear if the man and woman who were in the Mercedes will face charges as well.