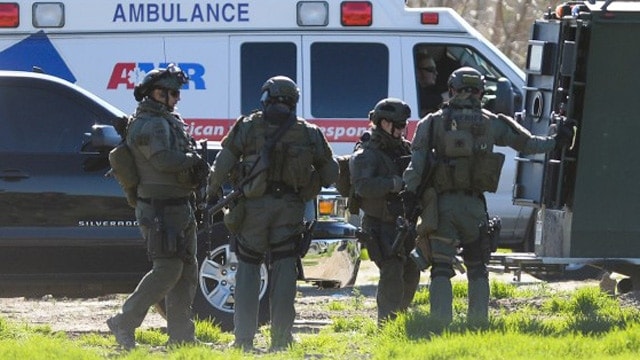 The initial call came in around 8:30 a.m., but authorities didn’t learn about the hostage until around noon. (Photo: Redlands Daily Facts)

A grueling nine-hour standoff between law enforcement and an armed man inside a Loma Linda, California, home came to a peaceful end Wednesday evening.

According to the San Bernardino County Sheriff’s Office, the suspect, who was a wanted parolee believed to be armed with at least one long gun, was holding a woman against her will during the standoff. Neither she or the suspect were injured.

Jim Burns, who is acquainted with the suspect through family members, told reporters that the officers on the scene “did a good job.” Burns said the suspect stole a shotgun from him after breaking into his house on Christmas Day. Burns also revealed the suspect previously told him that he would bot be taken alive.

Police first received a call about the situation around 8:30 a.m., although it’s unclear at this point who placed that call. Law enforcement surrounded the home and a police helicopter hovered above the house, with officials repeatedly asking the suspect to surrender. Their pleas, however, went ignored.

As the standoff ensued, residents in surrounding homes were evacuated and taken to safety, while authorities asked others to stay out of the area. Local businesses were temporarily closed and a nearby school was placed on lockdown.

Several hours after the initial call is when authorities learned there was a hostage inside the house, but after more than nine hours of negotiations, at 5:47 p.m., the sheriff’s office announced that the suspect had surrendered and let the hostage go.

Neither the suspect or the hostage being held against her will were immediately identified and it’s unknown why he was on parole or what charges he will now face.