Gun suicide prevention efforts that start at the gun shop 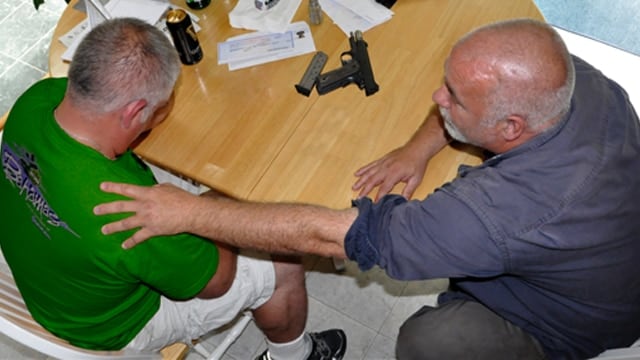 A still from a poster that reads “Concerned about a family member or friend?” adding, “hold on to their guns.” (Photo: New Hampshire Firearm Safety Coalition)

A gun shop owner says he was skeptical at first, but after several years working with the New Hampshire Firearms Safety Coalition, he feels it’s his duty to help prevent gun suicides.

“If Uncle Harry is getting a divorce and is distraught over it and he has firearms, you need to step up to the plate, you need to be the one,” said Riley’s Sport Shop owner Ralph Demicco, according to KQED. “It’s OK to intervene.”

Of the nearly 43,000 Americans who took their lives in 2014, about half of them — 21,334 — killed themselves with a firearm, according to the Centers for Disease Control and Prevention.

Demicco says his efforts started in 2009 when a public health researcher called him and told him three people who bought guns from his shop all killed themselves in a one-week period.

“To say I was speechless is an understatement,” said Demicco.

The realization was sobering for Demicco, who said he was skeptical of public health folks because he was worried they had a hidden agenda. But that phone call motivated him to start the Gun Shop Project — an effort rooted in gun culture that aims to help prevent gun suicides.

Several years ago, after that phone call, a woman came into Demicco’s shop and immediately pointed to a gun and said she wanted it. He said that was a red flag for him. Customers usually browse a bit more. He asked her if she really should be buying the gun, and she started crying.

“She had been released from a mental health facility that morning,” he said. “Didn’t feel like she was ready to go.”

In the years since getting involved, Demicco has gone to other gun dealers in New Hampshire and asked them to hang a suicide prevention poster in their stores. Another piece available for gun store employees is a tip sheet that outlines “signs that a potential buyer could be suicidal” as well as ways to respond to them.

Since 2009, efforts similar to Demicco’s have been adopted in 20 states.

Katie Cassidy is with the Shasta County Health and Human Services Department in California. Like Demicco, she understands that people in the gun world don’t like to be told what to think about who should and shouldn’t have guns.

“As soon as we took the approach of curiosity, rather than coming into the discussion with an opinion, that opened a lot of dialogue that hadn’t been at the table before,” said Cassidy.

Despite his skepticism, Howell says he’s okay having a pile of brochures at his shop. “If someone takes a pamphlet home and it saves one life, then it’s done its job,” he said.

“If they manifest it outwardly, that’s where we come in. If they don’t make eye contact, if they’re in distress, shut the sale down,” said Demicco, according to a report from The Trace earlier this year.

“We can put a little stumbling block in the way of their intentions and possibly give ’em just a little bit of time to realize that a long-term solution to a short-term problem is not the way to go.”