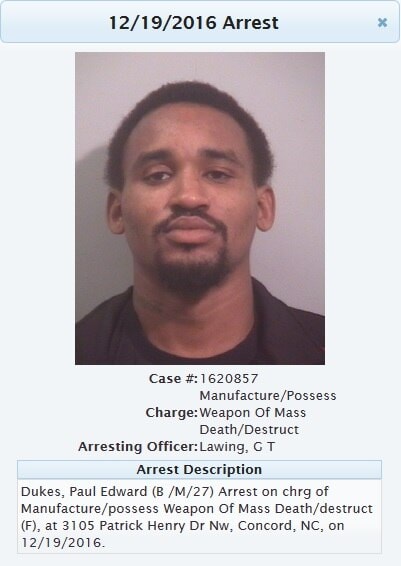 We thought at first this may be fake news, but we did find Dukes’ booking report dated Dec. 19 on the Concord Police Department’s website. (Photo: CPD)

A 27-year-old North Carolina man out on probation was arrested this week and charged after a report on some guns found by juveniles led police to his door.

Paul Edward Dukes, Jr. was charged with “possession of a weapon of mass death and destruction” on Monday, as reported by the Independent Tribune, after he was found with the rifle.

Concord Police went to see Dukes as part of an investigation into a case in which area juveniles reported finding some guns. On their visit, Dukes disclosed that he bought an AR-15 from a 9-year old youth for $20. (Don’t say you wouldn’t have at least thought about it).

However, as Dukes was apparently a prohibited firearms possessor, police took custody of the AR. Although he said he was just holding the rifle until he could pass it on to authorities, Dukes also come clean to a chopped-down Remington 870 shotgun in the closet that he found in Greensboro a few weeks back.

We thought at first this may be fake news, but we did find Dukes’ booking report dated Dec. 19 on the Concord Police Department’s website and the Tribune is a legit Concord-area paper owned by Berkshire Hathaway that publishes daily online and three days a week in paper format. So there’s that.