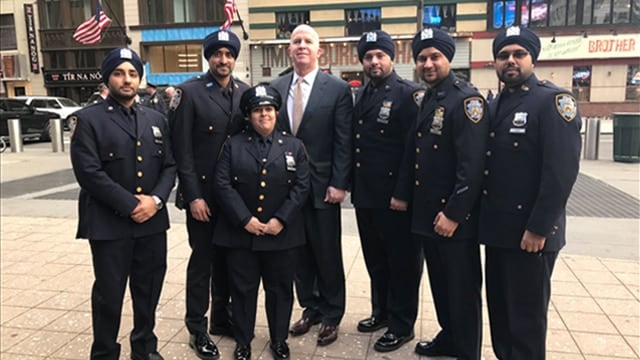 In a policy reversal Wednesday, the New York City Police Department announced new rules that allow Sikh members of the department to grow their beards and wear turbans.

The policy is set to be finalized next month, but Sikh and Muslim officers can take advantage of the religious accommodations now. Facial hair can be up to a half inch long, and turbans can be worn as long as they’re blue and have a shield affixed to it, replacing the traditional department-issued cap. NYPD Commissioner James O’Neil announced the move after a graduation ceremony Wednesday, saying it aims to “continue to make our department as diverse as possible.”

“We’re making this change to make sure that we allow everybody in New York City that wants to apply and have the opportunity to work in the greatest police department in the nation, to make sure we give them that opportunity,” the commissioner said, according to the New York Times.

There are 160 Sikhs serving in the NYPD, according to O’Neill. Of the 557 recruits that graduated from the Police Academy Wednesday, 33 are Muslims, and two are Sikhs. Previously, department policy prohibited turbans and only allowed facial hair in certain medically necessary instances. Sikh members of the department were forced to shave their beards, despite their faith, and they wore turbans underneath their police caps.

Earlier this year, a Muslim officer sued the department for suspending him over his beard. He was reinstated in June. In 2001, a Sikh officer was fired for wearing his turban on duty.

Religious groups are applauding the reversal.

“If the NYPD’s new policy indeed allows for Sikhs to maintain unshorn beards and turbans, that sends a strong message that Sikhs are part of the mainstream fabric of America,” said Sikh Coalition legal director Harsimran Kaur.

The NYPD joins departments in Washington, D.C. and Riverside, California, as well as the United States Army in allowing such religious exceptions.