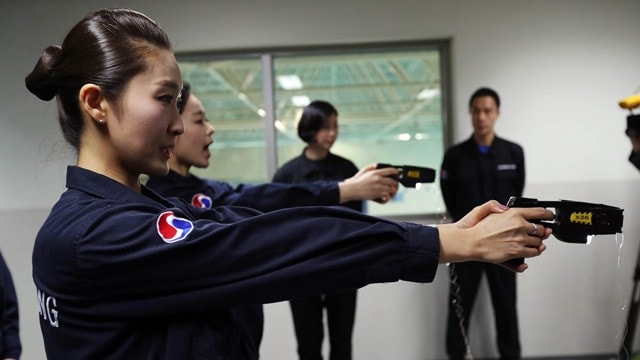 Korean Air Lines announced Tuesday that it will be training crew members to use Tasers and will hire more male flight attendants in the wake of an incident earlier this month where U.S. singer Richard Marx helped crew members subdue an unruly passenger.

The airline said it will allow crew members to “readily use stun guns” on violent passengers, according to Reuters.

The Dec. 20 incident saw Marx help crew members control a passenger who attacked flight attendants and passengers during a four hour debacle on a flight from Hanoi to Seoul. The passenger spit on and cursed at one crew member, a moment captured on video. He also pulled the hair of a flight attendant, according to Marx’s wife Daisy Fuentes.

Marx took to social media and accused the crew of being “ill-trained” and “ill-equipped” to handle the “chaotic and dangerous event”.

“Korean Air has incredibly strong security measures but is beefing them up and reinforcing them by increasing Taser training, looking at putting male flight attendants on all flights and it’s going to increase the overall training in the cabin,” said Korean Air spokesperson Penny Pfaelzer, according to NBC News.

Unlawful acts on airplanes in South Korea have more than tripled in the last five years, according to government data in that country.

Experts say Korean Air’s doing the right thing by training crew members on how to use Tasers. But some take issue with the desire to hire more male flight attendants.

“Gender has no bearing on ability to control an unruly passenger,” said Sara Nelson, international president of the Association of Flight Attendants-CWA, adding the airline “”should spend less time practicing sexist policies and more time implementing training and providing Flight Attendants with tools that actually make a difference.”

“On one hand, you could not do that in the U.S. … say that you’re going to hire a certain gender,” said Seth Kaplan, managing editor of the industry journal Airline Weekly. “But on the other hand, I think the gender balance here is a lot better than” in East Asia.

Despite the criticism, Korean Air says the new policy will aim to have one male in the cabin for each flight.